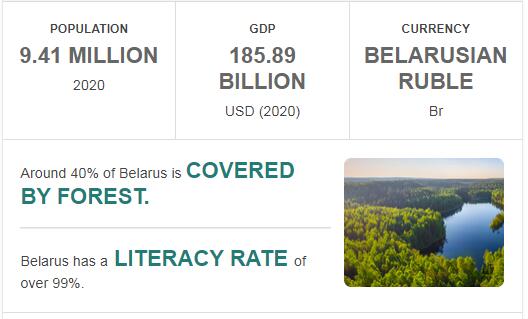 Belarus. In January, the regime decided to abolish the visa requirement for Belarus for 80 nationals, including all EU countries and the United States. The freedom of visa is valid for five days for tourists and business people, but not for official travel. Since Belarus and the Russian Federation abolished checks at their common border, the Belarusian visa freedom meant that foreign travelers could enter the Russian Federation as well. Moscow therefore introduced passport control on flights from Minsk and the security service FSB established a security zone along the border, which upset Belarus. See ABBREVIATIONFINDER for frequently used acronyms and abbreviations related to as well as country profile of Belarus.

In February, street protests broke out in Minsk against a 2015 decree on a so-called law against social parasites. Anyone who works less than 183 days a year must replace the state with lost tax revenue equivalent to about SEK 2,200 a year. Now it was also suggested that mothers with children under seven would pay the tax if the children go to kindergarten. Hundreds of thousands of Belarusians had been required to pay the tax with threats of fines, arrests, forced labor, revoked travel permits or driver’s licenses. In a society where many people lack jobs and struggle to survive, most had no opportunity to pay the tax. Instead, a couple of thousand Belarusians went out in protest of the law, a demonstration larger than in several years.

In October, a couple of hundred people in Minsk demonstrated and demanded the departure of President Lukashenka. They also demanded better conditions in the army, where many conscripts took their lives because of penalism. A couple of regime critics were sentenced to short prison sentences for protests.

Ahead of the EU summit in November on the so-called Eastern Partnership, President Lukashenka was invited to Brussels. It would have been the first time since 1995 that he visited the EU headquarters, but Lukashenka instead sent his Foreign Minister.