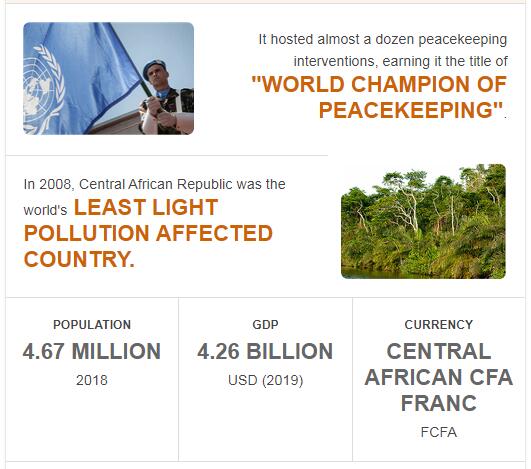 Central African Republic. The fact that elections could finally be held in 2015 and 2016 has not meant lasting peace in the war-torn country. According to Countryaah.com, various militant groups with roots either in the former rebel movement Séléka (associated with the Muslim minority) or in the mainly Christian militias under the name anti-balaka (“anti-machete”) continued their attacks, which are often targeted at civilians. In February, the human rights organization Human Rights Watch (HRW) accused the Union of Peace in Central Africa (UPC) group of having been behind the murders of about 30 civilians in the city of Balaka in the middle of the country. The deed took place in December 2016 and is supposed to have happened after UPC, which broke out of Séléka, called the people to a meeting. Later that month, the UN-stationed military force intervened against another outbreak group from Séléka, The National Front for the Rebirth of the Central African Republic (FPRC). The purpose of the operation, which was done by helicopter, was to protect the civilian population in the area that ended up in the firing line between the FPRC and UPC. See ABBREVIATIONFINDER for frequently used acronyms and abbreviations related to as well as country profile of Central African Republic.

In May, the UN wrote in a report on how hard the population was affected by the violence and described the abuses as bordering on war crimes or even genocide. Among other things, information about murders, tortures, rapes, kidnappings and recruitment of child soldiers was reproduced. In May alone, hundreds of people had been killed and close to 90,000 people forced to leave their homes. Of these, 20,000 fled across the Congo (Kinshasa) border during the second half of May. UN personnel were also attacked. Among other things, four UN soldiers were killed when a column was attacked by anti-Balakamilis nearly 50 kilometers east of the capital Bangui.

June, however, offered a small glimmer of light when 13 of the country’s 14 armed rebel groups signed a peace deal with the government. Another militia, called 3R, was expected to sign the agreement at a later date. The Vatican City acted as mediator and the agreement was signed in Rome. The cease-fire was announced on the day the agreement was approved by the parties. Nevertheless, hundreds of people were killed in battles between rival rebel groups the day after. The clash took place in the town of Bria in the northeastern part of the country. Just over a week later, over 20 people were killed in fighting in the city of Zemio in the southeast. The government had promised political influence in exchange for the rebels dropping their weapons. However, in a country where the central government only controls a small area around the capital, there is big money to be made for an armed militia, who can collect taxes or control mining in an area. In August, there were new reports of fighting between Christian and Muslim groups that cost at least 60 people their lives. Stephen O’Brian, head of the UN Office for the Coordination of Humanitarian Aid (OCHA), appealed to the UN to intervene in the genocide-like situation.

In April, Uganda announced its decision to call home the forces it had placed in the Central African Republic with the task of fighting the Ugandan rebel movement Lord’s Resistance Army (LRA). The movement, which has, among other things, been behind thousands of kidnappings of children, is no longer considered a threat to Uganda.

Like several times in recent years, alarm reports came out about how UN soldiers had committed sexual abuse in the Central African Republic. In June, 600 soldiers from Congo (Brazzaville) were sent home on allegations of committed abuse. In September, a document was leaked showing that the handling of irregularities, including sexual abuse of children, within the framework of the UN operation has not been properly investigated. The legal responsibility for this is the soldiers’ homelands. The reports related to the report concern soldiers from Burundi, Egypt, Gabon, Cameroon, Congo-Brazzaville, Morocco, Niger, Pakistan and Zambia. According to the UN, the issue would be investigated.

In November, the announcement came that the Central African Republic, Equatorial Guinea, Gabon, Cameroon, Congo (Brazzaville) and Chad have now all ratified the visa-free visa agreement between the countries. The process has taken 15 years to complete. The delay was mainly due to the fact that the oil-rich countries of Gabon and Equatorial Guinea feared that they would receive far too many people in search of work.