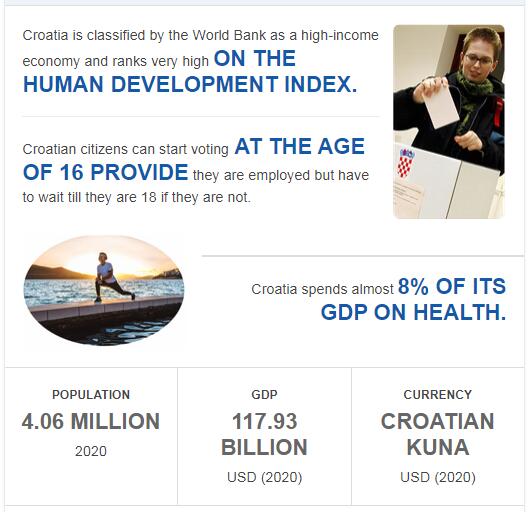 Croatia. During the refugee crisis of 2015-16, Croatia became one of several transit countries for migrants en route to the EU. When both Hungary and Slovenia closed their borders against Croatia by building barbed wire fences, many migrants risked getting stuck in the country. Croatia also faced major problems in guarding the 32 km long border with Serbia. The situation was seen as a threat to the country’s security and economy. At a meeting with Prime Minister Stefan Löfven in Stockholm on March 21, Croatia’s President Kolinda Grabar Kitarović said that if drones and increased electronic surveillance do not help, the last resort could be a physical wall or a fence against Serbia. See ABBREVIATIONFINDER for frequently used acronyms and abbreviations related to as well as country profile of Croatia.

A chocolate crisis that had started in December 2016 appeared to be resolved in April. In December, the Croatian president donated chocolate to the children in Dubrovnik. However, the chocolate, which was Serbian, had been distributed on the 25th anniversary of Dubrovnik’s defense against Serbian forces during the Balkan war. Thus, Grabar Kitarović had offended fallen compatriots. In April, the mine was forgotten since the two countries’ prime ministers met in Mostar in Bosnia and Herzegovina. Together they ate the Serbian chocolate.

In July, Croatia (together with Italy and Montenegro) got Venetian defense buildings from the 16th and 16th centuries listed on the UNESCO World Heritage List.

According to Countryaah.com, the Lucifer heat wave, with temperatures up to 47 degrees, led, among other things, to severe fires that raged in August in the Balkan Peninsula. In Croatia, the resort of Split was particularly affected.

The Croatian giant company Agrokor, with 60,000 employees in the agricultural sector in the Balkans, is the country’s largest private employer; two-thirds are employed in Croatia. However, the company has become insolvent and is at risk of bankruptcy. With revenue of EUR 6.7 billion, the company accounts for 15% of Croatia’s GDP. But now they have managed to get a debt mountain of over EUR 6 billion, and with a seemingly inevitable bankruptcy, there is a risk that Croatia will be pulled down in a serious recession.

In August 2016, 2,800 people – most Roma – in the country were stateless or at risk of becoming so. They were particularly disadvantaged regarding access to basic social benefits such as health care, social assistance and suitable housing. Roma children in the education sector were de-facto segregated.

In April 2017, a government crisis was triggered when the prime minister fired 3 of the government ministers from the small coalition party Most because they would not vote for confidence in Finance Minister Zdravko Marić. Most and the opposition accused Marić of withholding information to Parliament about an ongoing crisis in one of the country’s largest companies, Agrokor. Marić had worked in Agrokor before his prime ministerial office. A few days later, the 4th most minister resigned from the government. HDZ then began collecting signatures in Parliament for a vote of no confidence in President Božo Petrov, who at the same time chaired Most. Petrov resigned from the post in early May and was followed by the post of Gordan Jandroković of HDZ. But now the government no longer had a majority in parliament because Most had resigned. There was now a risk, that the country would be forced into the 3rd parliamentary elections in just 18 months. The crisis was averted at the beginning of June when 5 out of the Croatian People’s Party (HSN) 9 members joined the government coalition. The remaining 4 broke out of HSN and formed a new party.

Border Violence Monitoring (BMV) was able to reveal in October 2018 that in 54 cases, Croatian police had sent asylum seekers back across the Bosnia and Herzegovina border between September 29 and October 10. It was a total of 368 people. The collective refusals of refugees are contrary to the UN Refugee Convention, the UN and the EU’s Human Rights Conventions. Asylum seekers are regularly subjected to attacks by Croatian police and the non-compliance with the conventions confirmed that the EU’s human rights convention was also merely empty words on a piece of paper. It is neither enforced nor complied with.