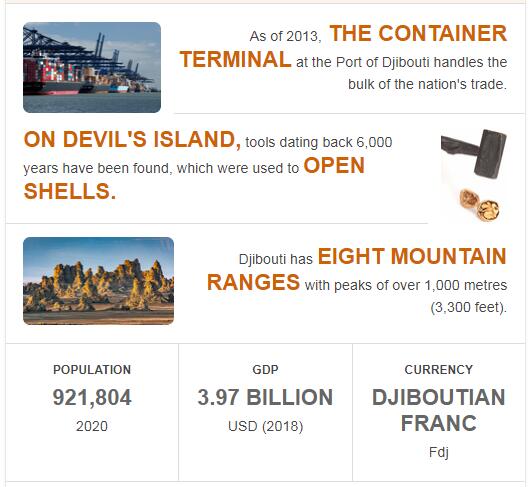 In September, the government began to detain illegal emigrants from Somalia and Ethiopia, which then constituted 15% of the country’s population, and at the same time set a deadline for mid-month for the time when they should have returned to their country of origin. Immigrants, however, did not want to return because of the oppression of persecution they were facing in their home countries. A government spokesman then declared that the expulsion of illegal immigrants was an inevitable step for the restoration of normal life in the country, as 80% of the violence and robberies in Djibouti are due to illegal immigrants. See ABBREVIATIONFINDER for frequently used acronyms and abbreviations related to as well as country profile of Djibouti.

In April 2004, 50 people died in the capital and 4,000 became homeless after extensive cloudbursts caused the River Ambouli to cross its banks, causing extensive flooding. Banks, schools and businesses were forced to keep closed. The Red Cross evacuated several thousands and distributed food and blankets.

When the last candidate had resigned a month earlier, in April 2005, Guelleh was re-elected as president with 100% of the vote and 70% turnout. Before then, the opposition had called for a boycott and predicted that widespread electoral fraud would occur.

In November 2005, all the union leaders and workers who had participated in a port worker strike the month before were released. Nevertheless, 36 of them were prevented from resuming their normal activities – including 11 managers of the Union of Travailleurs du port – UTP), who had been placed under surveillance and subsequently temporarily jailed.

The Free Trade Union International (FFI) published a report on professional rights in Djibouti in February 2006. The organization criticized the serious abuses that unions and trade unionists have been exposed to in Djibouti for several years. The report also pointed out the non-compliance between ILO statutes and Djibouti’s legislation in the areas of forced labor, trade union freedom and equal pay.

A French interrogation judge convened President Guelleh in February 2007 while staying in France for a Franco-African summit. The judge wanted to question the president about the death of a French judge in Djibouti in 1995. The case had initially been suicide, but subsequent investigations did not rule out political murder, which the widow after the accused accused Guelleh himself of being involved in.

In 2009, the leadership of the country’s large military base transferred to the United States AfriCom (Africa Command).