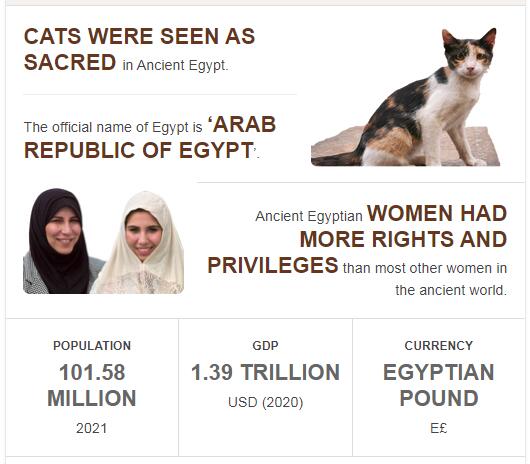 Egypt is a country located in Northern Africa. The security situation remained unstable during the year. In January, two attacks were carried out against police, both on the Sinai Peninsula and partly in the desert in the southern part of the country. The Islamic State (IS) took on the deed in Sinai. A total of at least 15 police officers were killed in the attacks. The following month, three copies were shot dead in the city of al-Arish on the Sinai Peninsula, which resulted in hundreds of copies leaving their homes. The attacks on Egypt’s Christian minority continued in April when two churches were sued by IS. A total of 45 people were killed in the death, which took place in the cities of Tanta and Alexandria on Palm Sunday. Following the events, President Abd al-Fattah al-Sisi announced a three-month state of emergency, which was then extended by another three months in both July and October. In May, the state prosecutor announced that 48 IS members would be brought before a military court. These people were suspected of interference, partly in the explosion in April, and for a similar attack on a chapel next to the Coptic St. Mark’s Cathedral in Cairo in December 2016. The attacks claimed a total of over 70 people’s lives. See ABBREVIATIONFINDER for frequently used acronyms and abbreviations related to as well as country profile of Egypt.

The unrest on the Sinai Peninsula continued even later in the year. In July, seven people, including two children, were killed when a car bomb broke out near a roadblock in northern Sinai. The car was detonated when it was stopped by soldiers about 200 meters from the roadblock. In the same month, 30 people were described by the military as “extremists” during a multi-day campaign on the Sinai Peninsula, where the army, the air force and the police participated. In October, twelve soldiers, three police officers and two civilians were killed for a week. Violent Islamists were suspected of being behind the death. In the western part of the country, 16 police officers were killed when unidentified perpetrators attacked the Bahariya oasis in the Libyan desert. The number of dead among the attackers was said to be about the same. The attack was answered with air raids, which according to the defense force resulted in “the death of a large number of terrorists”.

In November, the bloodiest attack in modern times occurred when 300 people were killed in an attack on a mosque during Friday prayers in Biral-Abd in northern Sinai. After detonating explosives and cars being set on fire outside the mosque, the people who fled the mosque were met by some 30 men who killed as many as they could. Although IS did not assume responsibility for the act, the perpetrators were suspected of having contact with the organization. A few days later, President al-Sisi ordered the military “with brutal force” to restore security on the Sinai Peninsula within three months.

The protracted legal process against former dictator Hosni Mubarak ended in March with a free sentence. Mubarak has been hospitalized in a military hospital while serving a three-year prison sentence for embezzlement. He was sentenced in 2012 to life imprisonment for being responsible for the hundreds of deaths during the so-called Arab Spring of 2011, when Mubarak finally collapsed. That judgment was revoked with the new ruling. By contrast, Mohammed Badie, the Muslim Brotherhood’s highest leader, was sentenced to life imprisonment in May for lying behind “violent attacks.” Badie has previously been sentenced to death three times but the judgments have later been changed. In June, 30 people were sentenced to the death penalty for involvement in the blast attack that in June 2015 costed prosecutor Hisham Barakat life. In July, 20 supporters of former President Muhammad Mursi were sentenced to death for causing the death of 13 policemen in connection with a riot in August 2013. A further 114 people were sentenced to 15 years in prison and life imprisonment. In October, another eight death sentences and 50 life sentences fell for the attack on the Cairo police station in 2013. In September, Mursi’s life sentence from June 2016 was upheld by the cassation court, whose ruling cannot be appealed.

In June, Egypt severed its diplomatic relations with Qatar. So did Saudi Arabia, Bahrain, the United Arab Emirates, Yemen and the Maldives. The reason is that Saudi Arabia’s regime is unhappy with the Qatari TV company al-Jazira’s reporting as well as Qatar’s support for the Muslim Brotherhood and Iran. Egypt and the other countries that have now broken with Qatar also accused the emirate of supporting IS and al-Qaeda. On the same month, Parliament approved the transfer of the uninhabited islands of Tiran and Sanafir in the Red Sea to Saudi Arabia. That was to be announced when the Saudi king Salman visited Egypt in April 2016. However, the decision has caused strong protests and has also been rejected in two judicial bodies. Later in June, the transfer was ratified by President al-Sisi ratifying the agreement.

In September, Egypt and the United States conducted their first joint military exercise since 2009. The countries practiced every two years from 1981, but the cooperation has been down due to the unstable situation in the country in recent years. The same month, the human rights organization Human Rights Watch (HRW) released a report in which the Egyptian security service was accused of systematic torture of regime-critical prisoners. Due to the large scale of torture cases, the actions of the security police were similar to crimes against humanity. The Egyptian regime responded by blocking HRW’s websites.