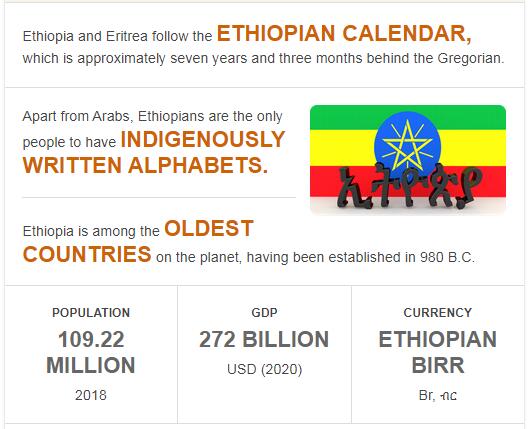 Ethiopia. The threat of starvation increased during the year, despite rainfall in April and May. Three years of severe drought due to the weather phenomenon of El Niño had killed many livestock, and in the border with Somalia, people sought relief in temporary camps where food and clean water were scarce. See ABBREVIATIONFINDER for frequently used acronyms and abbreviations related to as well as country profile of Ethiopia.

According to Countryaah.com, Ethiopia has one of Africa’s fastest growing economies, about a 10% increase in GDP annually, but most residents live outside the formal economy and grow for self-sufficiency. Therefore, the population is also poor and dependent on development aid during normal years. Now in September, the UN warned that just over 8.5 million Ethiopians needed food aid as a result of the severe drought.

The situation worsened as masses of refugees poured into miserable camps from neighboring Somalia and South Sudan, away from famine and fighting there. Diarrhea and infections raged and, according to MSF, the number of malnourished children increased dramatically in eastern Ethiopia, where death rates among children rose.

The UN Commissioner for Human Rights urged Ethiopia to allow a UN investigation into the violence in 2015 and 2016, when hundreds of regime-critical protesters were killed. But foreign investigators were not admitted.

In March, a arrested opposition leader from the Oromo people was indicted for stirring up the unrest and supporting a terrorist group. He refused a crime. Two other dissidents were prosecuted in their absence on similar grounds. According to Human Rights Watch, the regime used politically motivated charges to defeat the opposition and prevent peaceful protests.

Later, an opposition politician was sentenced to prison for six and a half years accused of encouraging terrorism. He had been detained since 2015, when on Facebook he criticized the regime for using violence against protesters.

Journalist Getachew Shiferaw was sentenced to 18 months in prison on charges of overthrowing business. According to critics, the regime regularly uses allegations of security breaches to silence opposition voices and stifle media freedom.

More than 100 people were killed in March, when the country’s largest landfill collapsed in the capital, Addis Ababa, and the landslide buried garbage dumps and housing in the nearby slums. Most of the victims were reported to be women and children. The gigantic garbage dump has been around for half a century, and hundreds of people live on and beside it.

Dozens of people were killed when an armed group crossed the border from South Sudan in March and, according to authorities, kidnapped more than 40 children.

In September, more than 100 people were killed and crowds were driven from their homes in violence in a disputed border area between the Oromia and Somali regions of eastern Ethiopia. Military was sent to the scene to curb the violence, which, among other things, stems from conflicts over land rights. During the year, more than 400,000 people were forced to flee their homes because of the local violence. In December, at least 60 people were killed in the violence between the various ethnic groups in the Oromia region. In October, at least five people were killed when police opened fire on protesters in Ambo west of Addis Ababa. It gave eyewitnesses to the violence, which was said to be rooted in protests against sugar shortages.

During the year, the government stopped all adoptions of Ethiopian children abroad. No cause was stated, and it was unclear how long the decision would last.

Ethiopian-Swedish physician Fikru Maru, who was convicted and imprisoned in Ethiopia on bribery charges, faced trial again during the year. He was now charged with terrorism. In May, it was announced that Maru was released from the bribe he had previously been sentenced to prison for. However, Fikru Maru was still held in custody, and the new trial on terrorism was postponed until 2018.