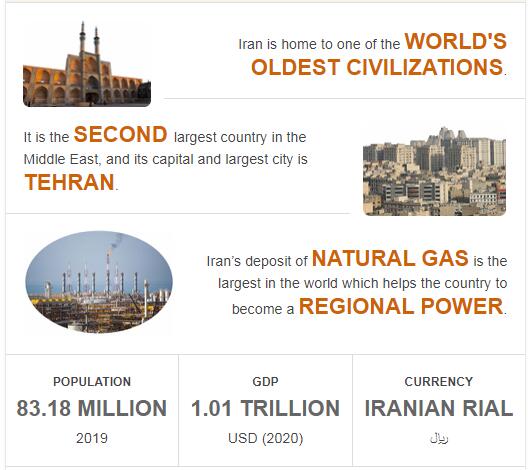 Iran. In the May 20 presidential election, incumbent President Hassan Rohani won 57% of the vote. His main opponent Ebrahim Raisi received 38%. The turnout was high, over 41 million went to the polls. Rohani’s victory is seen as a success for the reform-friendly forces. He wants, among other things, to reform state companies, open up to the outside world and attract foreign investors to the country. The question is just how successful he is. It is noteworthy, however, that in August, after criticism that the new government contained only men, Rohani appointed two female ministers. It was Massoumeh Ebtekar who became responsible for women’s affairs, and Laya Joneydi, who was responsible for legal issues.

In February, US President-elect Donald Trump imposed new sanctions on Iran, including against persons, companies and organizations linked to the Iranian missile tests, and in July the same against those who support “illegal Iranian actors or cross-border crime”. However, Trump backed from his 2016 election promise to tear down the nuclear deal with Iran from 2015. The Tehran government believes that the United States, through its sanctions, violates that particular agreement and threatened in August to revert to its old policy. In a televised speech, President Rohani said: “It’s not about weeks or months, but hours or days. We will go back to our previous situation but much more powerfully. ”

According to Countryaah.com, Iran was one of the countries hit in January by the US entry ban introduced to primarily, according to President Trump, “keep radical Islamist terrorists out of the United States.” The entry ban led, among other things, to the Iranian director Asghar Farhadi not coming to the Oscars gala; his film “Forushande” (The Salesman) was nominated in the best non-English-language film category.

Prime Minister Stefan Löfven’s visit to Iran in February attracted attention at home in Sweden. This, since Minister of Commerce Ann Linde was seen wearing a veil in connection with the visit. For example, the Liberal Party leader Jan Björklund thought this was a “failure for feminist foreign policy”. The Swedish government and business delegation mainly addressed trade issues, according to Löfven, they want to quickly return to the same export volume as before the sanctions against the country. Löfven also raised the issue of human rights, but he never said what was raised and with whom.

In early June, two coordinated terrorist attacks were carried out in the capital, Tehran. At least 17 people were killed and about 50 injured in the attack, which according to its own statement was signed Islamic State (IS). The Revolutionary Guard therefore accused Saudi Arabia of being behind the attacks, including with the help of suicide bombs in Parliament and in Ayatollah Khomeini’s mausoleum.

A methane explosion in a coal mine in northern Iran in early May resulted in at least 35 people dying 1.3 kilometers below ground.

On a few occasions during the year, minor confrontations with the US Navy occurred. In January, three warning shots were fired against Iranian vessels approaching the USS Mahan at high speed in the Hormuz Strait, and in July the USS Thunderbolt in the Persian Gulf was forced to fire an Iranian vessel, according to the US Navy belonging to the Revolutionary Guard, which was less than 150 meters distance from the American ship.

In November, a severe earthquake occurred at the Iraq-Iran border. Over 500 people were reported dead and over 8,000 injured in the quake, which measured 7.3 in magnitude on the Richter scale. Its epicenter was 19 kilometers deep, about 3 miles outside the city of Halabja, Iraq.

At the beginning of the year, Iran’s former president Akbar Hashemi Rafsanjani passed away. He was president from 1989-97 and was a moderately conservative pragmatist; among other things, he advocated the release of political prisoners. Rafsanjani turned 82 years old.

In March, Twitter got an unlikely follower. Former President Mahmoud Ahmadinejad then joined Twitter; when he was president, he wanted to ban its use, which now applies to ordinary citizens. On March 5, we read the first message from the old president: “In the name of God, may peace be upon all freedom-loving people in the world.”

At the end of the year demonstrations and protests were underway against the government. The reason was general price increases, including a rising fuel price, and general financial difficulties. Iran’s Interior Minister Abdolrahman Rahmani Fazli urged people to stay away from “illegal gatherings” and the Revolutionary Guards threatened with “iron fist” if protests continued. The protests are said to be the largest since the 2009 election, when the Green movement protested. Then it was the highly educated and academics who protested, now it is the working class. Before the turn of the year, at least ten people had been killed and hundreds arrested in clashes between protesters and police.