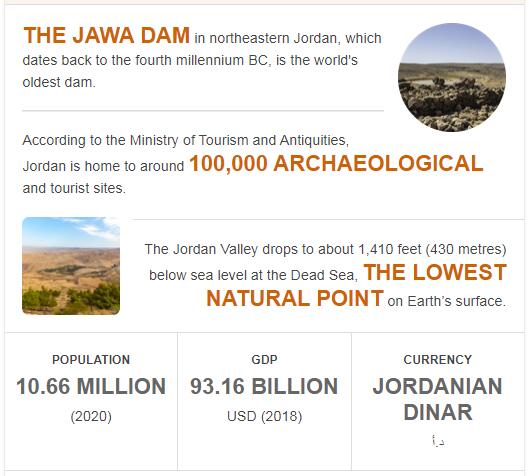 Jordan. The Swedish embassy in the capital Amman was suspected in March for black trade with passports. A woman who applied for a residence permit in Sweden was offered SEK 100,000 priority in the queue. In May, the Ministry of Foreign Affairs reported the case and the embassy started an investigation together with the Swedish Migration Board. During the year there were more indications of black trade in passports, including in Sudan and Turkey. See ABBREVIATIONFINDER for frequently used acronyms and abbreviations related to as well as country profile of Jordan.

According to Countryaah.com, Jordan was one of the countries affected by the British and US ban from bringing larger electronic items than mobile phones on air from March. However, the country was not covered by US President Donald Trump’s entry ban in January.

In early February, Jordan conducted air raids in southern Syria against the Islamic State (IS). The military says the raids were carried out to the two-year anniversary of the Jordanian pilot who was shot down by IS and brutally killed. The bombings destroyed, among other things, a weapons stockpile.

In March, the head of the UN agency UNESCWA (West Asia Economic and Social Commission), Jordanian Rima Khalaf, resigned after the organization published a report that Israel introduced an apartheid system against the Palestinians. She resigned at the urging of UN chief Ant車nio Guterres.

In July, the Israeli embassy in Amman was attacked when two Jordanians were killed and one Israeli was injured.

The generalized adoption, during the seventies, of multidisciplinary methodologies in archaeological research has favored the start of explorations and excavations, which, thanks to the greater range of data collected and the increased range of observation optics, have returned physiognomies sharper and deeper dimensions to the numerous cultures that followed in Transjordan over the millennia. The renewed investigation potential has in particular favored, starting from the beginning of the 1980s, the start of intensive surface reconnaissance which, in addition to ascertaining the presence of a large number of sites from all periods (even those that did not appear in the classic settlement sequences reconstructed in the past, such as, for example, the Middle Bronze Age, absent in those of N. Glueck),occupational facies in their essential paleoenvironmental contexts.

For the northern area we remember above all the American reconnaissance in southern Ḥawrān, French on the Paleolithic of the Wādī al-Zarqā ‘, English of the Wādī’ Araba, near Umm Qays; for the central one, the Canadian (B. Mac Donalds) and American (Arizona State University) explorations in the Wādī al-Ḥasā, and the German one in the Ard al-Karak (German Evangelical Institute); for the eastern one, the Limes arabicus project started in 1980 by the American Center of Oriental Research for the study of the fortresses of the Roman limes, and the Arzaq project promoted since 1975 by the British Institute of Archeology for the study of prehistory and the paleoenvironment of internal oases; for the southern zone, the systematic explorations of the area between al-‘Aqaba and Ma῾ān (WJ Joblin, University of Sidney), of the region of alBitrā ‘(Petra; HG Gebel and JM Stark, University of Tübingen), of the along the ancient via nova Traiana (JP Oleson), in the alBaydā ‘area (ethno-archaeological studies by EB Banning) and in the Edomite area in general (S. Hart and RK Falkner, British Institute of Archeology).

The choice of the sites on which to carry out excavation investigations was able to take advantage of this preliminary geo-archaeological reconnaissance work, and the interventions mainly used the contribution of applied sciences (geology, natural sciences, etc.). For prehistoric times, the excavation, begun in 1983, of the important pre-ceramic Neolithic site of Ayn Ġazāl (GO Rollefson, Yarmūk University), in which the oldest known examples of statuary were found (7th mill. BC). The resumption of excavations (in 1984, after those of H. de Contenson in 1953) at Tell al-Shuneh Nord (C. Gustavson-Gaube, Tübingen) has allowed the uncovering of large pre-protohistoric sequences, from the late Neolithic ceramic to the Chalcolithic to the Ancient Bronze Age i. The same can be said for the site of Ǧabal Abū Ṯawāb, near al-Rūmmān, excavated starting from 1984 by Z. Kafafi (Yarmūk University), with ” Yarmukian ” levels, and of the Early Bronze Age I (about 3200-3000 BC). For the Chalcolithic, the recent (1986) Franco-Jordanian excavation initiative (CNRS and Yarmūk University) at the site of Abū Ḥamīd in the Jordan Valley, where, thanks to an exemplary ” total ” intervention, an entire village of the 4th ° mill. BC is coming to light.

The cultures of the Bronze Age are studied above all in the sites of Tell al-Sa῾īdiyya (excavations resumed in 1984 by J. Tubb of the British Museum, after those of JB Pritchard of 1964-67) and of Ṭabaqat Faḥal (ancient Pella), where the Middle Bronze and Late Bronze levels appear (we are now in the tenth excavation campaign) in all their circumstantial integrity thanks to the interdisciplinary excavations conducted by the University of Sidney in collaboration with the College of Wooster (Ohio).

For the Iron Age the important excavations of Tell alMazar (K. Yassine, Jordan University) and Tell Dayr ῾Allā (G. van der Kooij, Leiden University, and M. Ibrahim, Yarmūk University) should be remembered. In Pella there are naturally also important levels of the Roman era as well as in the other three cities of the Decapolis currently under investigation: Gadara (German excavation since 1975), Abila (American excavation since 1981) and Gerasa (international excavations starting from the 1970s). Finally, we recall the studies and restorations of the Franciscan Fathers in Madaba and Siyagha-Monte Nebo.