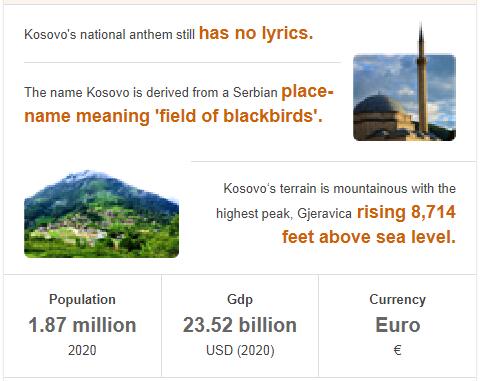 Kosovo. In June, Kosovo held a new election since the government in May cast a vote of no confidence in Parliament. The cooperation between the government’s largest parties, the center-right party PDK and conservative LDK, had long been strained. See ABBREVIATIONFINDER for frequently used acronyms and abbreviations related to as well as country profile of Kosovo.

In the June 11 election, a coalition led by PDK (34% of the vote) won. According to Countryaah.com, the opposition party Vetëvendosje received 27% and the former government partner LDK just under 26% of the vote. But it would take until September before President Hashim Thaçi’s party PDK could secure 63 of Parliament’s 120 seats. This was done with the help of the small party New Alliance for Kosovo. Former guerrilla leader and former prime minister Ramush Haradinaj was given the task of forming government on September 7. Haradinaj had been arrested in France in January after Serbia issued an arrest warrant on suspicion of war crimes committed during the 1990s in the Kosovo Liberation Army (UCK). However, he was released a week later. In 2005, Haradinaj had resigned as prime minister on charges of war crimes.

At the beginning of the year, a minor conflict arose between Kosovo and Serbia. A Serbian train, painted with the slogan “Kosovo is Serbian”, was stopped on January 16 from crossing to Kosovo. President Thaçi was similar to the provocation of the Russian annexation of the Crimean Peninsula in 2014. Serbia’s President Tomislav Nikolić said a group of Kosovo Albanians planned to attack the train and accused Kosovo of escalating the conflict.

From 1990, Kosovo was fully subject to Serbian rule. The name was changed to Kosovo- Metohija, as it was in the era of communist and anti-Albanian rule. Serbian military and police imposed strict control in the province, and Albanians were severely discriminated against. In September 1990, more than 100,000 Albanians lost their jobs, including government officials and media people. This led to a general strike.

The tension increased, but the Albanians avoided direct rebellion. During the period 1990-1997, the Kosovo Albanians developed their own parallel institutions within government agencies and educational systems. The residents boycotted all Serbian elections and held their own instead. Albanian cultural rights claims were systematically rejected.

In 1991, Yugoslavia began to disintegrate when Slovenia, Croatia and Bosnia erupted and declared independence. Kosovo also declared itself a sovereign state and formed a provisional government. In 1992, the Kosovo Albanians held both parliamentary and presidential elections, and the Kosovo Democratic League party won a clear victory. The party’s leader, academic Ibrahim Rugova, received over 99 percent of the vote in the presidential election. Serbian police forces tried to control Kosovo, and there were several reports of abuses against the civilian population. Between 1993 and 1997, ethnic tensions in Kosovo and Serbian violence against Albanians increased.

In 1998, the conflict in Kosovo intensified. Serbia’s President Slobodan Milošević used force to stifle the Kosovo Albanian opposition. From March, Serbian police were in regular fighting with Kosovo’s liberation army UCK. The chaotic situation in Albania in the south, where the weapons depots were opened, caused the Albanian resistance in Kosovo to be given weapons to fight back against the Serbian authorities. The conflict escalated. Serbian police and military were accused of ethnic cleansing and massacres.

In September 1998, NATO gave Belgrade an ultimatum to stop its progress against the Albanian people, and repeated threats of NATO attacks against Serbian forces in Kosovo. The Organization for Security and Cooperation in Europe (OSCE) deployed an observer force of 2,000 men as part of an effort to resolve the conflict.

Peace talks did not go ahead, and in March 1999 NATO launched air strikes against a number of targets in Serbia. Serbian forces responded by intensifying attacks against civilian Kosovo Albanians. Over one million Kosovo Albanians were driven to the border areas against Macedonia, Albania and Montenegro. In June 1999, Serbia and Montenegro signed an agreement on Serbian withdrawal from Kosovo. NATO blasted its bomb attacks, and the war was officially over. The UN took over the administration of the area, and the UN Security Council passed a resolution authorizing the NATO-led peacekeeping force (KFOR) in Kosovo.

After the war, a number of mass graves of Albanian civilians were uncovered. It was estimated that at least 10,000 Albanians were killed by the Serbs during the NATO bombing. Very quickly, the Albanian refugees began to return. In Kosovo, KFOR forces were unable to cope with police duties, which meant a power vacuum that led to widespread abuse of the Serbian population.

In November 2001, elections were held in the province to a newly formed regional parliament, which became a big victory for Ibrahim Rugova and his moderate nationalist party LDK. LDK held the post in the 2004 election. Rugova died in 2006 and was succeeded by Fatmir Sejdiu.