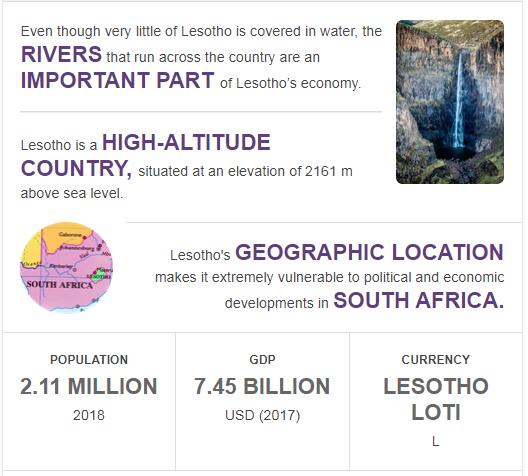 Lesotho. New elections in June led to the politically unstable Lesotho getting a new government led by former Prime Minister Tom Thabane. The election – the country’s third in five years – was announced after Prime Minister Pakalitha Mosisili lost a vote in confidence in March when several members of his party, the Democratic Congress (DC), resigned. See ABBREVIATIONFINDER for frequently used acronyms and abbreviations related to as well as country profile of Lesotho.

According to Countryaah.com, Thabanes Allbasothian Convention (ABC) formed a coalition government with three smaller parties. Among other things, he promised to restore law and order. Six opposition parties said that election fraud had occurred.

In September, army chief Khoantle Motsomotso was killed by two officers, who were in turn shot dead by the army chief’s bodyguards. The incident is believed to be linked to the fact that the officers wanted to stop Motsomotso from investigating alleged abuse and murder.

In October, former army chief Tlali Kamoli was arrested and charged with murder of a police officer during the failed coup attempt in 2014.

In November, the regional cooperation organization SADC decided to send more than 250 soldiers to protect the government of Thabane when dealing with suspected officers.

The March 1993 legislative elections in the reign of Lesotho, the first since 1970, saw a landslide victory for the Basotho Congress Party (BCP), the party of leader N. Mokhehle, who assumed the post of prime minister the following month. Although international observers had not denounced the occurrence of fraud, the results were contested by the Basotho National Party (BNP), the party in power for more than fifteen years after the 1970 coup, which enjoyed the support of the military coup who they had governed the country from 1986 until the start of the democratization process wanted by Colonel E. Ramaema.

During the summer of 1996, social protest against the Mokhehle government grew. At the same time, the rumors about the abuse and ill-treatment of detainees by the military and the news about the habitual use of arbitrary arrests became more insistent. In 1997 new riots shook the life of the country; in February, after having failed the negotiations, the government forcibly repressed the attempted insurrection of the police forces in the capital Maseru.

The strong tension in the country also seemed to compromise the fate of Prime Minister Mokhehle, who in March was ousted from the leadership of the BCP by decision of the party’s executive committee. Although the country’s High Court had ruled Mokhehle’s removal invalid, new attacks on his work, deemed unproductive and ineffective, prompted the prime minister to form a new party, the Lesotho Congress for Democracy. (LCD), which saw the accession of many members of parliament elected with the BCP, a party now in the minority. In February 1998, at the request of Mokhehle, King Letsie iii dissolved the National Assembly in view of new legislative elections which were held in May, decreeing the landslide victory of the LCD, which won 78 seats out of 80. The results of the elections, violently challenged by the opposition, they rekindled tensions in the country where protests against the ruling party intensified during the summer. At the request of Prime Minister B. Pakalitha Mosisili, in office since the end of May, on 22 September 1998, South African and Botswana troops intervened militarily in the country to restore calm, after some officers of the army had mutinied by rising alongside the opposition. Order restored, the withdrawal of the troops was completed in May 1999.