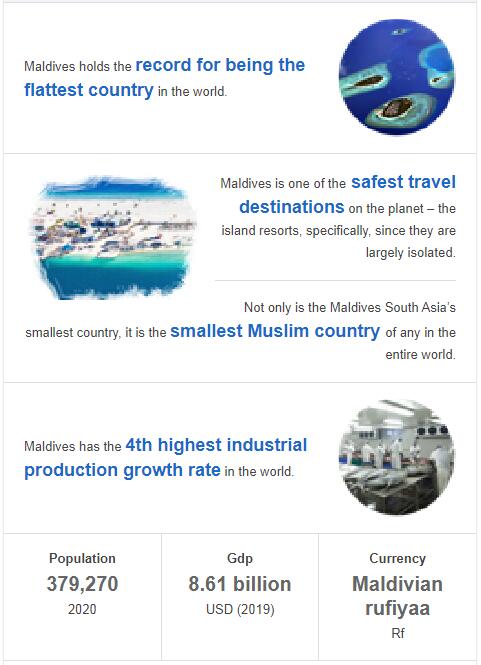 Maldives. The troubled political situation that prevailed in the country in recent years continued in 2017. In March, parts of the opposition, with the Maldives Democratic Party (MDP) as the driving force, tried to bring President Adbulla Maseeh Mohamed to court. According to Countryaah.com, the President is close to President Abdulla Yamin and the opposition does not believe that there are fair conditions before the presidential election to be held in 2018. At one point, the situation became so troubled in the House of Parliament that the military was called. See ABBREVIATIONFINDER for frequently used acronyms and abbreviations related to as well as country profile of Maldives.

In July, soldiers were barred from the parliament building and MDP politicians were barred from visiting their workplace. The military referred to an enhanced security situation during the celebration of the country’s independence day, an event that was attended by Pakistani Prime Minister Nawaz Sharif. In August, the entrance to Parliament was again blocked, according to the MDP in an attempt to prevent the opposition from putting the President before the national court. However, when Parliament met later in the day, the session was adjourned after a few minutes, so no vote was taken. In August, the leader of the opposition Jumhuri Party (JP), Qasim Ibrahim, was sentenced to 38 months in prison for bribing parliamentarians. The aim should have been to get the members to vote in order for the President to be put before the national court.

In May, 23-year-old liberal blogger Yamin Rashid was murdered in his apartment in the capital, Male. Rashid had recently engaged with Maldives politicians on his blog. Two people suspected of being involved in the murder were arrested.

History. – At the beginning of the 21st century, political power was still controlled by the regime of President Maumoon Abdul Gayoom, in office since 1978. After the first concrete openings to the start of a reform process in a democratic sense – with the registration of parties in the July 2005 – further steps forward took place in the following years, although there was no lack of protests and moments of tension. In June 2008, some amendments to the Constitution were definitively approved: the new text introduced the limit of two presidential terms, strengthened the prerogatives of Parliament, established the independence of the judiciary and protected human rights, while providing for restrictions on the exercise of freedom religious. In the subsequent presidential elections in October – the first multi-party – Gayoom, candidate of the People’s Party (DRP), he was defeated in the second round by Mohamed Nasheed, former political prisoner and leader of the Democratic Party (MDP), who obtained about 54% of the votes. In the vote for the renewal of Parliament (May 2009) it was the DRP that won the relative majority of seats (28), followed by the MDP (26). Alongside the goal of consolidating democracy, Nasheed promoted a reform program based on administrative decentralization and privatization, the implementation of which was however complicated by the absence of a parliamentary majority in his favor; the precarious economic conditions and the global crisis also forced the executive to adopt austerity measures.

In a climate of growing tension due to rising prices of basic necessities and high unemployment, after the arrest in January 2012 of the President of the Criminal Court Abdulla Mohamed, there were new demonstrations and a police mutiny: Nasheed – considered the instigator of the arrest – resigned the following February, however denouncing a coup against him. Amid protests from supporters of the outgoing president, deputy Mohammed Waheed Hassan took power and formed a unity government in which the MDP did not participate. In the first round of the presidential election in September 2013, Nasheed had an advantage over his main opponent Abdulla Yameen Abdul Gayoom – half-brother of former President Gayoom – but the Supreme Court overturned the vote on the basis of alleged fraud. The elections were repeated in the following November and, in the ballot, Yameen won the victory. The president’s political force – the Progressive Party born of a split in the DRP – also won the most seats (33) in the subsequent legislative elections of March 2014. In 2015, on the basis of anti-terrorism laws, Nasheed was arrested (February) and then sentenced (March) to 13 years in prison for his responsibilities in the detention of Judge Abdulla Mohamed. Concerns about the sentence were expressed by the United States, the European Union and NGOs such as Amnesty International.