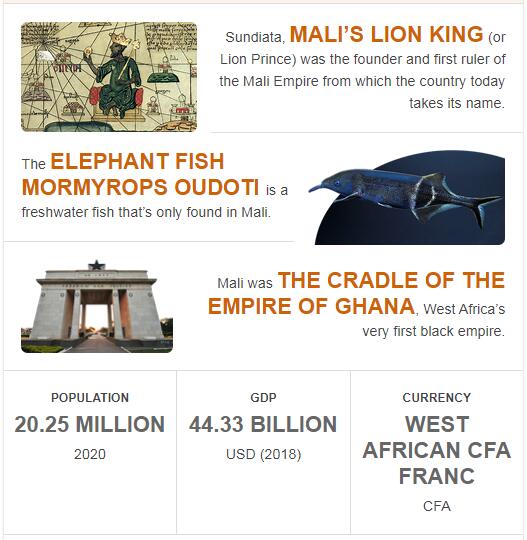 Mali. In January, President Ibrahim Boubacar Keïta hosted an African-French summit that gathered 35 heads of state and government in Mali’s capital Bamako. It was a political success that the meeting could be held despite the violence in the country. According to Countryaah.com, the government wanted to give a picture of Mali as an attractive target for foreign investors and not just tormented by civil war, Islamic extremism and kidnappings. See ABBREVIATIONFINDER for frequently used acronyms and abbreviations related to as well as country profile of Mali.

But a few days after the meeting, 77 people were killed and over a hundred injured when a suicide bomber exploded at a military base in Gao in eastern Mali. An Islamist group linked to al-Qaeda took on the deed, the bloodiest in the country in several years. In another attack northeast of Gao, 14 members were killed in a government-run militia.

Due to the uncertain situation, the organizers canceled the desert festival Festival au Désert, which would have returned to Timbuktu after several years in exile. The music festival was seen as a terrorist target, as militant Islamists banned music when they took over northern Mali. It was a tough blow to a society where music is a life-sustaining force.

In February, Mali and neighboring countries decided to establish a regional security force of 10,000 soldiers and police to fight militant Islamists. The headquarters would be located in Mali. The UN gave the go-ahead, and the EU promised funding.

At a peace conference in Bamako in April, the Mali government was invited to begin talks with the leaders of the violent rebel groups jihadist Macina’s liberation front and Islamist Ansar al-Din.

The Malian military and the UN force MINUSMA suffered losses in the fight against terror. In March, eleven Malian soldiers were killed on a military base near the Burkina Faso border, and five soldiers lost their lives in an attack on a base near the Mauritanian border. Several soldiers were wounded and the others were taken hostage.

UN soldiers and UN personnel from various nations were killed in ambush and attacks in both northern and central and eastern Mali. A Swedish UN soldier was slightly injured by explosions in Timbuktu in May. MINUSMA is described as the UN’s most dangerous peace mission with over 100 dead soldiers in total.

The Swedish military operation in the UN force in Mali was extended to 2018, when it is planned to include 380 people. The task is mainly intelligence work but also transport flights.

In June, more than 30 people were killed in several days of violence in central Mali between the Fulani people, who are livestock keepers, and Dogon, who are farmers. Many people became homeless through the violence, which is rooted in a historical conflict over land.

At least five people were killed by armed attackers in an attack in June against a tourist resort outside Bamako. Four of the attackers were killed in gunfire. Many guests were taken hostage but could be freed by Malian security forces.

In June, the Swedish Johan Gustafsson, who was kidnapped in Timbuktu in 2011 and released as hostage by Aqim (al-Qaeda in the Islamic Maghreb), was released. According to some information, Mali’s security service helped to free the Swede.

In July, fighting with many deaths in northern Mali was reported between the Tuareg-dominated former rebel CMA and the loyalist militia. The CMA then entered the important city of Meneka closer to the border with Niger.

The repeated violence against UN troops and relief workers has led to the interruption of many food and health care interventions. MSF and the Red Cross were temporarily forced to withdraw from northern Mali.

After months of opposition supporters’ protests, in August President Keïta decided to abandon the planned referendum on a criticized proposal for a new constitution. As a result, the proposal was withdrawn. The opposition felt that it would give the president too much power.

A jihadist leader in northern Mali was sentenced in August to ten years in prison for amputating the hands and feet of suspected thieves with reference to Sharia law.

In September, two rival Tuareg groups signed a peace agreement in northern Mali. It was the separatist movement CMA and a government loyal militia.

UN Children’s Fund UNICEF said in October that tens of thousands of children in Mali are being threatened by malnutrition because of the violence and the refugee flows it is causing.

Idrissa Maïga, former defense minister, was appointed new prime minister during the year, but in December he and the entire government resigned. A new head of government was appointed the president’s confidant, former Defense and Foreign Minister Soumeylou Boubèye Maïga.