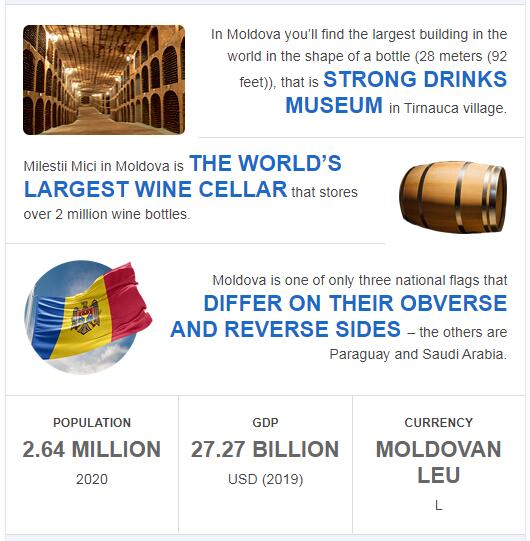 Moldova. The year was marked by a bitter political conflict between the country’s new Prorussian President Igor Dodon and the EU-friendly coalition government. See ABBREVIATIONFINDER for frequently used acronyms and abbreviations related to as well as country profile of Moldova.

Dodon met President Vladimir Putin in the Kremlin in January, saying he wants to restore trade with Moscow and hopes to tear up the cooperation agreement with the EU. On a visit to Brussels, Dodon warned that approaching NATO was threatening Moldova’s security. He wanted to prevent NATO from opening a liaison office in the capital, Chișinău, while the government hastened the opening. Dodon described it as a provocation.

According to Countryaah.com, President Dodon rejected three new ambassadors proposed by the government, including London. The government responded by calling home the Moldovan ambassador from Moscow and state officials were warned to go there.

The European Commission decided on up to EUR 100 million in aid and loans to Moldova, the EU’s poorest country. According to the Commission, Moldova is plagued by corruption and mismanagement that has weakened the economy and slowed growth.

The European Parliament occasionally provided assistance to Moldova due to corruption and political uncertainty. The government reiterated its promises to reform the judiciary and increase the fight against corruption.

Moldova was highlighted in an international tangle of money laundering, where over $ 20 billion was illegally brought from the Russian Federation via Latvia to shell companies in a number of countries. Moldovan bank officials and lawyers were investigated for participation.

Liberal party ministers left the government in protest against the party’s vice-chairman and mayor of Chișinău being arrested and placed under house arrest suspected of corruption. According to the party leadership, the arrest was politically motivated without sufficient evidence.

President Dodon called for a referendum on his controversial proposal that the presidential office should be given power to dissolve parliament and announce new elections. However, the vote was stopped by the Constitutional Court.

Seventeen people were arrested in Moldova and Ukraine on suspicion of planning to murder Vladimir Plahotniuc, leader of the Democratic Party government. Weapons, including grenade launchers, had been seized, according to prosecutors.

In July, Parliament voted for a contentious change to the electoral system, with half of the members being elected in one-person constituencies and half on party lists. The opposition left the House in protest. The president signed the law, which was met by popular protests in the fall.

Russia’s Deputy Prime Minister Dmitry Rogozin had to turn around when he was to visit Transnistria in July with President Dodon. EU sanctions against Moscow hindered Rogozin’s plan to fly to Moldova.

In July, the majority in Parliament adopted a statement that the Russian military should be withdrawn from the transnistrian outbreak region. Socialists and Communists left the plenary in protest.

In September, President Dodon vetoed the government’s plan to allow Moldovan troops to participate in a NATO exercise in Ukraine. The government ran over the president and sent 57 soldiers to the US-led maneuver in Ukraine. When Parliament was called in to vote down several of the president’s vetoes, Dodon accused parliament and government of trying to limit his power as commander-in-chief.

When snow chaos erupted in the Moldavian capital in April, Swedish Västtrafik’s travel service, which has its ordering center located in Chișinău, was hit. The employees there could not get to work, and electricity, telephone and internet were knocked out. West traffic solved the temporary crisis by redirecting the talks to Skövde and Senegal.