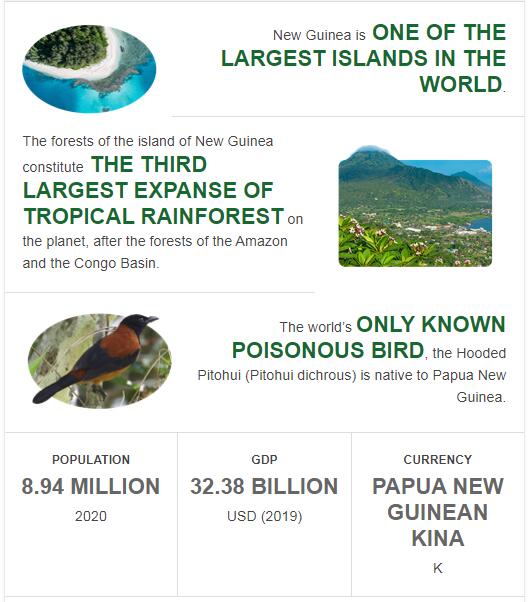 Papua New Guinea. Human Rights Watch (HRW) criticized Australia in January for cruel treatment of the refugees sent to camps in Papua New Guinea. They were regularly subjected to violence, threats and harassment, according to HRW, who felt that the camps should be closed. Papua New Guinea’s highest court had declared the year before that the camp on the island of Manus was in violation of the Constitution and meant violations of human rights. See ABBREVIATIONFINDER for frequently used acronyms and abbreviations related to as well as country profile of Papua New Guinea.

Under President Barack Obama, the United States pledged to accept hundreds of asylum seekers from the Papua New Guinea camp as Australia welcomed refugees from Central America. US new President Donald Trump now described the agreement as the worst ever but reluctantly agreed to respect it.

According to Countryaah.com, Australia’s Prime Minister visited Papua New Guinea in April. After his visit, violent gunfire erupted against the Manus camp. Some injured were reported, and according to police, drunken soldiers were behind the attack.

In May, the local government in Bougainville announced that the autonomous island’s copper mines should be opened for mining again, after lying down for 40 years due to civil war and environmental damage conflicts. Bougainville, which has one of the world’s largest copper mines, Panguna, will vote for independence in 2020.

A mass escape from a prison in the town of Lae in May ended with 17 prisoners being killed when shot by guards. Nearly 60 other prisoners escaped.

In June, a deal was concluded in which the Australian government agreed to compensate just over 1,900 asylum seekers with $ 70 million (about $ 460 million) for cruel and abusive treatment at the Papua New Guinea camp between 2012 and 2014.

In June, Papua New Guinea’s elaborate parliamentary elections began, which lasted for two weeks so that even the most inaccessible villages could vote. The electoral movement was mainly about the country’s poor economy, with the opposition accusing Prime Minister Peter O’Neill’s government of corruption and mismanagement which led to heavy debt. Violence was reported from the election with several deaths, incorrect voting lengths, accusations of electoral fraud and difficulties for electoral workers to reach isolated villages. However, election observers from the Commonwealth countries considered that the election was largely correct.

Prime Minister O’Neill and his party The People’s National Congress fell sharply to 27 seats, while the Opposition National Alliance received 14 and Pangu 11. However, O’Neill gathered broad support from small parties and independent candidates and could be re-elected as head of government with 60 of Parliament’s 111 mandate. Later, most of Pangu’s members joined the government side as well.

In September, the authorities began to move asylum seekers from the Manus camp. However, several hundred refused to leave the camp out of concern for their safety and for worse conditions in new camps. In November, police were dispatched to the camp, forcing all asylum seekers away.

It was reported during the year that a Filipino fisherman was rescued off the island of New Britain in Papua New Guinea after his boat had driven over 3,000 kilometers on the sea from the Philippines in close to two months after bad weather and fuel shortages.