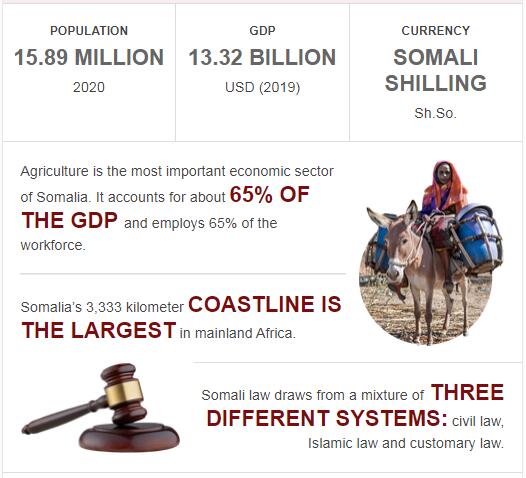 Somalia. In February, a new president was elected by a vote in Parliament. According to Countryaah.com, a total of 24 candidates, most of them former ministers or people who returned from exile. The election itself was held at Mogadishu Airport. In the first round, incumbent President Hassan Sheikh Mohamud received the most votes. In the second, he was put against Mohamed Abdullahi Mohamed, who was Prime Minister 2010-11. Somewhat unexpectedly, the latter received 184 votes against 97 in the second round. Actually, two-thirds of the vote is required to be elected president, but the challenger was declared victorious after Hassan Sheikh Mohamud acknowledged being defeated. The new president had lived in the United States for several years and is called “Farmajo”, a nickname that comes from the Italian word for cheese, formaggio, and which he learns to have received because his father must have liked cheese a lot. Hassan Ali Kheyre was appointed new Prime Minister, who has both Norwegian and Somali citizenship and who was the head of the British oil company Soma Oil & Gas. See ABBREVIATIONFINDER for frequently used acronyms and abbreviations related to as well as country profile of Somalia.

At the end of February, President Mohamed announced a state of disaster throughout the country. Somalia was plagued by drought and, according to the World Health Organization, the country was at risk of starvation for the third time in 25 years. The President therefore appealed for help from the outside world.

In November, presidential elections were held in the outbreak republic of Somaliland. Three candidates participated in the election, which was postponed several times. Winning was Musa Bihi Abdi from the Peace, Unity and Development Party (Kulmiye), who received 55% of the vote against 41% for Abdirahman Mohamed Abdullahi (known as “Irro”), representing the Waddani Party. Abdi succeeded his party mate Ahmed Mohamed Silaanyo as head of state. In the violent protests that followed the election and “Irros” allegations of irregularities, at least eleven people were killed.

The security situation remained unstable during the year. In May, the first attack in Somalia was carried out by the Islamic State (IS). Five people were killed in a suicide attack in the Puntland region. In November, a UN report was published describing how a faction of IS has established itself in Puntland, where several attacks have been carried out. The center of the group was the city of Qandala in the Bari region, which was feared to be a sanctuary for IS fighters fleeing Syria and Iraq.

The Somali terrorist group al-Shabab also continued to be a serious threat. In October, at least 358 people were killed and over 100 injured when two bomb attacks were carried out in the central parts of Mogadishu. A few days later, thousands of people in the capital protested against al-Shabab. At the end of the month, a hotel popular with government officials was attacked with two car bombs and five armed men stormed the building. The attack cost at least 27 people their lives. Unlike the bombings in the middle of the month, al-Shabab took on the latter action but the movement was suspected of both deaths.

During the year, the United States conducted several attacks on suspected terrorists, partly with drones, and with a November air strike against an al-Shaba camp northwest of Mogadishu, when more than 100 militiamen were killed.

gross national product (GNP, per resident and year) N/ A

State and form of government
Provisional constitution of 2012
Federal Republic
State religion: Islam
Islamic law (Sharia)
Parliament: House of the People with 275 appointed members; Upper House with 54 appointed members.
Election of the head of state by the parliament every 4 years.
Suffrage from 18 years.