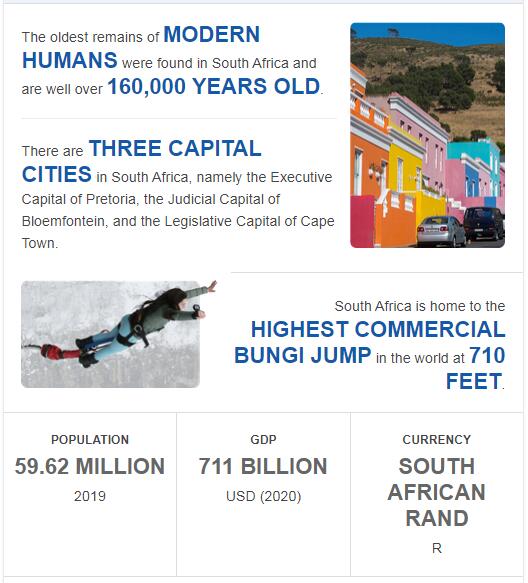 South Africa. A bitter power struggle between the opposition and corruption-accused President Jacob Zuma continued during the year. See ABBREVIATIONFINDER for frequently used acronyms and abbreviations related to as well as country profile of South Africa.

When Zuma gave his annual speech on the situation in the country, he was interrupted by members of the left-wing EFF (Economic Freedom Fighters) who silenced the president. The red-clad EFF members were then thrown out of parliament by a violent riot by guards. The largest opposition party DA (Democratic Alliance) members marched themselves in protest against Zuma.

The capital of Pretoria was shaken by xenophobic riots in February when South Africans attacked migrants’ homes and shops. A large protest demonstration was held against Nigerians, who were accused of organized crime.

According to Countryaah.com, President Zuma was in conflict with Finance Minister Pravin Gordhan on economic policy, and in March Gordhan was dismissed. This led to stock market turmoil and currency declines as Gordhan was seen as a stabilizing force for South Africa’s economy and a counter-force against corruption.

Zuma received a lot of criticism for his decision, also in his own party ANC (African National Congress) and from its Vice President Cyril Ramaphosa. Demonstrations were held, the opposition planned a vote of no confidence, South Africa’s credit rating was lowered and Zuma’s departure was demanded by the country’s largest trade union COSATU.

Tens of thousands of people protested in several cities demanding Zuma’s departure. Opposition parties, trade unions and churches formed an alliance against Zuma, the Freedom Movement, with the goal of removing the president. When Zuma was to speak first in Bloemfontein, the meeting had to be canceled after the public buzzed the president, who had to leave the place under the protection of security guards. Zuma claimed Gordhan was fired because of a security report that he conspired against Zuma. The opposition then got right by the Supreme Court in its request that the basis for the president’s decision be made public.

In May, former presidents Thabo Mbeki, FW de Klerk and Kgalema Motlanthe called for national dialogue to resolve the crisis they considered the country’s worst since democracy was introduced in 1994.

At the parliament’s distrustful vote in August, Zuma succeeded, despite the fact that the Speaker, supported by the Supreme Court, agreed to the opposition’s demand for secret ballot. Zuma’s relations with the corruption-accused Gupta business family created problems for the president. The audit firm KPMG was widely debated since it approved the Gupta Empire’s accounts, where several million dollars of public funds were used for a private party.

When the ANC held a party congress at the turn of the year, there was an open conflict between two factions that supported each of them as candidate for new president after Zuma. It was Zuma’s former wife and the former president of the African Union Nkosazana Dlamini-Zuma against Vice President Cyril Ramaphosa. The former advocated social equalization and the latter emphasized economic growth. At the end of the year, the party elected Cyril Ramaphosa as new chairman, making him a likely presidential candidate.

In August, the Foreign Ministry made a controversial decision to grant Zimbabwe presidential wife Grace Mugabe legal immunity and leave her country after being reported to the police for mistreating a woman at a hotel in Johannesburg. The South African opposition was very critical, demanding that Mrs Mugabe be arrested by police and demanded a parliamentary inquiry.

In August, the DA’s leaders demanded that Parliament be dissolved and new elections held. In September, the opposition called on the Constitutional Court to investigate whether President Zuma is guilty of crimes that could lead to national law.

Tens of thousands of members of the trade union movement COSATU demonstrated in September. They accused Zuma of corruption and demanded that South Africa resign and be succeeded by former union leader Ramaphosa.

In October, the Minister of Higher Education, Blade Nzimande, was dismissed, who criticized President Zuma and urged him to resign.

Also in June, Sudanese President Omar al-Bashir attended an AU meeting in South Africa. al-Bashir was subject to an arrest warrant by the ICC and the North Gauteng High Court therefore issued an order requiring the government (more specifically Justice Minister and police) to arrest al-Bashir so that he could be handed over to the ICC for prosecution. The government refused and allowed the president to travel back to Sudan. In October, the government brought the matter before the Supreme Court, declaring that South Africa was willing to withdraw from the ICC if it would otherwise be required to extradite sitting heads of state. The Supreme Court issued a ruling in May 2016 that the authorities’ failure to arrest al-Bashir was in violation of the law.

Police brutality and abuse continue to be widespread. 396 civilians were killed during police actions in 2014-15. In November 2015, eight former police officers were sentenced to 15 years in prison for the murder of Mozambican taxi driver Mido Macia in 2013. Police officers had tied his arms to the bumper of a police car and then dragged him by the car on an asphalt road.

In October, lawyers sued 32 gold mining companies on behalf of thousands of gold miners at the South Gauteng High Court . The claim was a replacement for the diseases – especially silicosis and tuberculosis – the miners had incurred in working in the mines.

The country was marked by the worst recorded drought ever. A combination of the weather phenomenon of el Niño and global climate change. 2.7 million households lacked direct water and the drought destroyed the harvest, causing food prices to skyrocket. Maize increased 14%, broke 7% and eggs 15%. By mid-2016, the disaster was so widespread that 15 countries in southern Africa joined forces, requesting the global community for $ 2.8 billion. US $ 40 million in bread-feeding aid people who were in immediate danger of famine. Although Africa was most affected, el Niño and global climate change affected all 5 continents. Denmark cut its foreign aid to below 0.5% of GDP and instead spent the money on war and the accommodation of refugees in Denmark. ( Farmers bear brown of South Africa’s severe drought: ‘All we can do is pray’, Guardian 17/11 2015; Southern Africa appeals for billions to cope with El Niño devastation, Guardian 26/7 2016)

In March 2016, the Constitutional Court affirmed the state prosecutor’s investigation into President Zuma’s non-security-related construction at his residence and ordered the president to repay the public funds he had spent on the construction.

Up until the local elections in August 2016, riots erupted in the KwaZulu-Natal province. During the period January-July, 25 violent incidents were reported, including 14 murders of city councilors, candidates or members of political parties. The Minister of Police set up a working group to investigate and prosecute those responsible for the politically motivated crime in the province.

In July, authorities announced an 8% increase in tuition payment for the high school from 2017. It sparked widespread and often violent student protests where the requirement was free schooling.