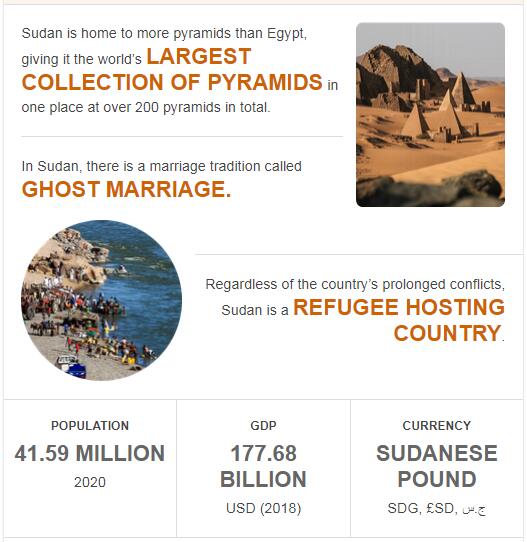 Sudan. According to Countryaah.com, Sudan’s diplomatic isolation was partially broken during the year. In October, the United States imposed a series of sanctions, the oldest introduced in the 1990s, citing Sudan’s success in cooperating against terrorism and giving aid organizations greater access to vulnerable regions such as Darfur. In addition, Sudan had promised not to buy weapons from North Korea. The decision was expected to facilitate investments in Sudan’s mining and energy sectors and agriculture. See ABBREVIATIONFINDER for frequently used acronyms and abbreviations related to as well as country profile of Sudan.

However, Sudan was not excluded from a list of countries that the United States believes are devoted to state-sponsored terrorism. Sudan thus does not receive debt relief or buy American weapons.

In September, the United States removed Sudan from a contentious entry ban list, which included countries with a predominantly Muslim population, which President Donald Trump announced early this year. The European Union promised large sums in exchange for Khartoum’s help in controlling migration flows. Human rights groups were critical to the cooperation.

In March, President Omar al-Bashir appointed his trusted Bakri Hassan Saleh as prime minister, a post abolished at the 1989 coup.

al-Bashir continued to travel abroad despite an international arrest warrant issued by the International Criminal Court (ICC) in The Hague against him for suspected war crimes and other crimes in Darfur. Jordan did not heed calls from human rights groups to arrest or deny al-Bashir entry in March when the country hosted a summit with the Arab League. In November, al-Bashir visited the Russian Federation for the first time. He asked President Vladimir Putin for help in resisting US aggression and discussed energy and agriculture cooperation and arms purchases.

In June, the UN Security Council decided to reduce its peacekeeping operation in Darfur in 2018. The UNAMID joint force established by the UN and the African Union (AU) would decrease by 30%, to about 8,700 soldiers in June 2018. Sudan emphasized that the violence has subsided in Darfur and extended an unilateral ceasefire. The UN recalled that 2.6 million people displaced during the conflict must be allowed to return to their homes. In November, government forces arrested militia leader Musa Hilal, who was accused of genocide and other crimes in Darfur. He had refused to disarm his militia.

The government also extended a unilateral ceasefire in the Blue Nile and South Kurdufan provinces. The rebel movement SPLM-North (Sudanese people’s liberation movement) accused the government of breaking the ceasefire. At the same time, SPML-North was shaken by deep contradictions.

The War in Western Sudan (Darfur) has helped to underline the deep cultural lines of conflict in Sudan, with contradictions between hard-to-define ethnic groups, and which have long historical roots. While the distinction between Muslims and Christians is clear, the ethnic distinction between “Arabs” and “Africans” is blurred, all the while “Arabs” for several hundred years have been married to “African” peoples and do not form a single or distinct group. The conflict in Darfur is partly the result of a policy in which “Arab” groups want to expel “Africans” from the area, and partly because of economic and social conditions that have deteriorated as a result of changed natural conditions and neglect. from the Khartoum Central Government. Unlike in South Sudan, the war in Darfur does not have the religious dimension; the entire population of Darfur is Muslim,

The conflict in Darfur Province is based on social and economic contradictions that came to the surface in the 1980s. The three Darfur states are the home of the fur people, the area’s dominant group of people; Zaghawa and Messalite are other important groups. These African agricultural peoples have increasingly come into conflict with Sudanese nomads from the Arab-dominated north. While the nomads previously gained access to pasture lands in the agricultural areas, in agreement with the indigenous peasants, this resource was contested after several drought periods in the 1980s reduced the pasture land, during which the nomads penetrated into new lands. In the early 2000s, this contradiction developed into an armed uprising against the central government. The rebellion bottomed, as in other parts of Sudan, substantially in perceived marginalization, with little investment in developing the region. The war in Darfur is believed to have started in 2003, with attacks by rebel groups against installations belonging to the government, first against the airport in the state capital of El Fasher, after which the government launched a military and political campaign in the region.

Two guerrilla groups, the Sudan Liberation Movement Army (SLMA) and the Justice and Equality Movement (JEM), have challenged government control in Darfur militarily. SLMA, formed in 2001 as the Darfur Liberation Front, is close to the South Sudanese SPLA, while JEM is linked to Islamist leader Hassan al-Turabi. JEM has political-religious goals, SLMA is a secular movement; JEM is fighting for an Islamist Sudan, SLMAs want a united, democratic Sudan. SLMA and JEM both targeted military attacks against Sudanese authorities in Darfur and were met by an Arab militia, Janjaweed, which the government has set against the guerrillas, but substantially against civilian targets. Janjaweed is not an organization with political goals, but a military instrument for the government, which however reports that it has control of the group. However, the military link between the government and Janjaweed, in the form of weapons supplies and direct support during operations, has been demonstrated by several international teams. Janjaweed is considered a long way to carry out systematic banditry, and it has deployed widespread terrorism and abuse against the civilian population, with robbery and rape, destruction of villages and displacement of people. The government is accused of exploiting the uprising to launch ethnic cleansing in Darfur and to oppose peoples groups. UNhas held the Sudanese authorities responsible for the disaster in Darfur, which the US government declared in 2004 as a genocide.

A humanitarian ceasefire was entered into between the Sudanese government and SLMA and JEM, following mediation from the government in Chad, in N’Djamena, in April 2004. The African Union became involved in the conflict and deployed observers in Darfur, AU Mission in Sudan. At the same time, the UN force UNAMIS was commissioned to support AMIS and follow the government’s obligations. The UN Secretary-General set up a commission to investigate reports of violations of international law and to assess the allegation of genocide. In its 2005 report, the Commission concluded that the Government and Janjaweed were guilty of serious violations of international law and human rights, and that most attacks were targeted at civilians and approaching crimes against humanity, but not a policy of genocide.

In 2005, the Sudanese government set up a special court for those accused of war crimes in Darfur. The African Union (AU) negotiated the ceasefire Darfur Peace Agreement between the government and the SLMA faction led by Minni Minnawi, signed in Abuja, Nigeria in May 2006. AU negotiations took place in parallel with discussions in the UN Security Council, which through several resolutions demanded cessation of the acts of violence and that the government should disarm Janjaweed and hold its leaders accountable. Sudan signed an agreement with the UN where the government assumed responsibility for disarming the group – which did not happen. In October 2008, the government invited rebel groups to talks, which resulted in the announcement of a unilateral ceasefire that was quickly broken. In February 2009, a letter of intent for peace in Darfur was signed by the Sudanese government and JEM, following negotiations in Doha, Qatar.

The conflict in Darfur is further complicated as a result of divisions within the guerrilla groups, partly because a faction was pushed out by SLMA in 2005. Both groups participated in the negotiations, like JEM, but only the faction led by Minni Minnawi signed the agreement; he was then appointed advisor to the President of Sudan, and at the same time became the leader of a new, semi-autonomous government for Darfur. Minnawi’s faction of SLMA has particular roots in zaghawa; the second part, led by Abdel Wahid Mohamed al-Nur, has particular support from Fur.

An unintended effect of the agreement was the emergence of additional factions and militia groups, many of whom joined together in the National Redemption Front umbrella organization(NRF), established in 2006 by groups that opposed the peace agreement. SLMA and JEM announced in 2006 to merge, but participated in subsequent negotiations as two separate organizations. According to the peace agreement, the militia groups were to be disbanded and rebel soldiers integrated into the government army. Furthermore, it stipulated a distribution of political power and financial resources between the central government and local authorities, as well as regulations to improve the security situation. The peace agreement was not implemented, and a peace solution has not been found. The large number of groupings and factions, which have failed to gather together for joint negotiations, have become a significant obstacle to resolving the conflict. This also helped to prevent peace talks between the government and several rebel groups, held in Sirte, Libya in October 2007.

The peace agreement did not end the war, which escalated in 2006-2007. The agreement was followed up by international pressure, not least from the US, to strengthen the AU peacekeeping force, which with its 7000-1000 soldiers was considered too small. Sudan was awaiting, and partly rejecting, the deployment of a UN force to replace the AU force. President al-Bashir has opposed what he called “recolonization of Sudan” by deploying foreign forces in Darfur, and in particular from the UN. Sudan consequently rejected the UN resolution of August 2006, when the Security Council decided to send 17,500 soldiers and 3,000 UN police officers to Darfur through an extension of the mandate of the United Nations Advance Mission in the Sudan(UNAMIS), which was deployed in South Sudan in 2004/2005. A subsequent solution, a joint force with troops from both the UN and the AU, was also rejected by the Sudanese government before al-Bashir subsequently accepted such a solution, but with a more limited participation of UN soldiers than expected.

In 2007, Norway responded positively to the UN request for participation in UNAMIS and prepared a joint engineering force with Sweden, but the Sudanese government refused to accept departments from Norway and Sweden, as well as from some other countries. Both Norway and Sweden, on the other hand, have contributed staff officers. The new UN force, the African Union / United Nations Hybrid Operation in Darfur(UNAMID), headquartered in El Fasher, formally took over from AMIS at year-end 2007/2008. UNAMID’s authorized force is approximately 26,000 uniformed personnel, including 19,555 soldiers and 6432 police officers. At the beginning of 2009, the force was about 15,000. The main task, through a mandate given by the Security Council, is to protect civilians and to contribute to security for humanitarian assistance. Both proved difficult due to a large area and inadequate strength. The EU established a military operation, EUFOR, for short-term action and with a UN mandate for the protection of refugees and humanitarian aid, in the border zone between Sudan (Darfur) and Chad. The force was deployed in March 2008 and withdrawn in March 2009; the majority of the 3,500 soldiers were transferred to UNAMID.

The situation in Darfur after 2003 is considered the most serious humanitarian crisis in Africa, with widespread attacks on the civilian population, an estimated 300,000 killed and over 2 million people displaced. The displacement of the agricultural population led to large areas being broken and contributed to further food shortages. Human rights organizations, the UN and several states have pointed out the serious humanitarian situation. Bashir’s announcement of a ceasefire in Darfur in November 2008 was seen in the context of the US genocide, and as part of Sudan’s diplomatic push to withdraw it. Negotiations on the situation in Darfur were maintained, but without progress. The situation was also affected by regional developments, including in Libya and Chad.