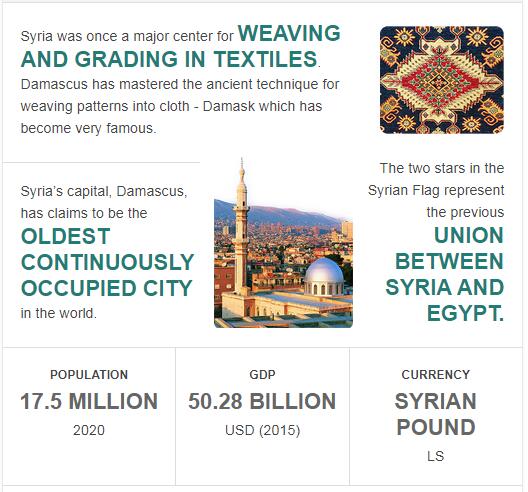 Syria. According to Countryaah.com, the war in Syria has cost 320,000 lives since 2011, and more than 5 million civilians are now on the run. No brightening appeared to be in sight. Despite this, two parallel peace talks were held during the year on Syria, both the UN-led Geneva and the Russian and Turkish but also Iranian leadership in Kazakhstan’s capital Astana. See ABBREVIATIONFINDER for frequently used acronyms and abbreviations related to as well as country profile of Syria.

At the end of January, discussions in Kazakhstan between the Syrian government and the rebels culminated in an agreement on a common mechanism to secure the ceasefire in Syria that came into force for the new year. In addition, the Russian Federation managed to come up with a draft of a new constitution for the Syrian rebels. The Athens meeting had already received its blessing from the UN Security Council on New Year’s Eve 2016. Negotiations continued later in May but were interrupted by the opposition following air strikes against civilian targets in Syria. In December, it was agreed to continue the talks in January 2018.

However, through the Asta negotiations in May, they managed to create four safe zones to ensure that humanitarian aid could be reached. The agreement would last for six months and forbid fighter jets from the US-led coalition, as well as Syrian and Russian flights, to fly over the zones.

The Geneva peace talks, which should have started on February 8, did not start until February 23, continued at the end of March, was canceled and started again in May but remained unsuccessful. Only at the end of November did the Geneva negotiations continue, but they collapsed in December.

In July, a ceasefire, albeit fragile, was met, which meant that Syrian government forces and the opposition would not conflict. The Russian Federation supports the al-Assad regime while the United States supports certain rebel groups but has a common enemy in the Islamic State (IS). The ceasefire meant that in October IS could finally be defeated in its self-proclaimed capital ar-Raqqa (since 2014) by the Kurdish-Arab rebel alliance SDF (Syrian Democratic Forces) with support mainly from the United States.

The offensive against ar-Raqqa had already begun in November 2016, but gained further momentum in February. In June, at least 300 civilians had been killed since February. At the same time, reports came that the Aleppo province had been completely liberated from the Islamic State (IS), which has been in the province since 2014.

In February, Human Rights Watch (HRW) reported that the Syrian regime had used nuclear weapons in connection with the capture of Aleppo in the fall of 2016. According to HRW, at least eight nuclear weapons attacks were made, including by helicopters releasing chlorine bombs. The regime’s gas attacks on civilian targets continued during the year. At the beginning of April, at least 87 people, including some 20 children, were killed in a gas attack in Khan Sheikhun city in Idlib province. According to British researchers, the nerve gas sarin had been used. The UN tried to condemn the attack, but a resolution in the Security Council was stopped as usual by the Russian Federation. That did not stop the United States from carrying out an attack on a military base in Hums with the help of 59 cruise missiles, Tomahawk. The targets were aircraft hangars, fuel, radar and air defense systems. However, the result of the attack was more symbolic;

During the year, several tragic events occurred with civilian victims. In March, more than 70 people died in attacks by the US-led coalition against a mosque and a school in northern Syria. In a bombing of a bus convoy with evacuees outside Aleppo in April, more than 120 people died, including 68 children. The attack was carried out by suicide bombers dressed as relief workers. In May, more than 100 civilians, including 40 children, died in US-led air strikes against the city of Mayadin in the eastern part of the country. Most of the dead had sought shelter in the town hall. In August, more than 40 people, including 19 women and 19 children, were killed in a US-led attack on the IS headquarters in ar-Raqqa. In November, at least 75 people were killed in an IS act against refugees in Dayr az-Zawr, where only a few days earlier the Syrian army had expelled IS. The city was hit by another tragedy in November when over 50 civilians were killed in a Russian air strike. Over 20 of them were children.

The Islamic State (IS), which in December 2016 had taken back the ancient world heritage city of Palmyra, destroyed in January a number of famous sights, including the Roman amphitheater and a tetrapylon. IS entered the city for the first time in 2015 and then initiated a systematic destruction of priceless cultural buildings and objects. They were expelled from the city in March 2016, but returned to Palmyra in December 2016. In March 2017, the Syrian military, with the help of Russian soldiers, returned to the city.

In one of the zones since May (through Russian, Turkish and Iranian initiatives) secured the zones, in rebel-controlled eastern Ghouta, in October there were 350,000 civilians trapped and without humanitarian aid. Only at the end of November did the Syrian regime accept a cease-fire; in spite of the continued airstrikes in December against this, the last rebel stronghold in Syria.

During the year, Syrians joined the Finns as the largest group of foreign-born in Sweden. In March, there were 158,000 Syrian-born Swedish citizens registered in Sweden (the number of asylum seekers is not included), compared with 153,000 Finnish-born. It is the first time since World War II that Finns are no longer at the top.