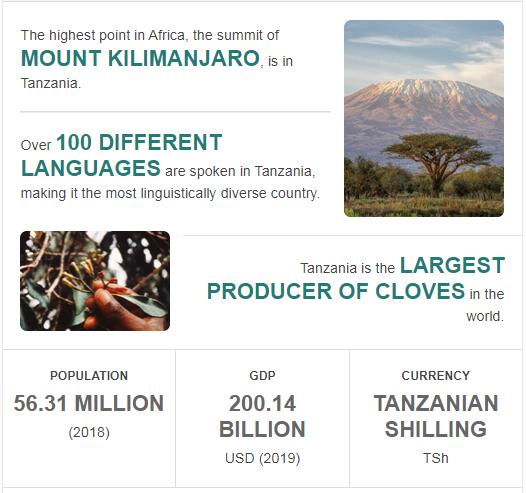 Tanzania is a country located in Eastern Africa. In the New Year, President John Magufuli dismissed the head of the state energy company, which just raised electricity prices to cover major losses. Only about 40% of the population has access to electricity. Despite huge resources of gas, Tanzania suffers from a chronic electricity shortage as production takes place with hydropower and the dams are often threatened by drought. See ABBREVIATIONFINDER for frequently used acronyms and abbreviations related to as well as country profile of Tanzania.

Magufuli attacked in harsh words in government-critical media in January. He specifically pointed out a couple of newspapers and said that their days were counted. Under a new law, the authorities can stop publishing by confiscating printing presses. Civil rights organizations came together in a call for increased respect for freedom of expression and assembly. The president also attacked the tax evasion of large companies, especially the mining companies. He urged the authorities to impose large outstanding tax claims on these companies, which is the most important tax base in a country with a large gray economy. Furthermore, the president focused on the growing drug trade in East Africa and urged the police and the judiciary to strike hard even if it involved politicians, ministers or their families.

In March, think tank Twaweza presented a survey which showed that 78% of the population suffered from food shortages. The government had denied the problems and accused opposition politicians of false information. According to the UN, more than 1 million Tanzanians suffered from acute food insecurity. The drought in East Africa had led to an increase in the price of maize.

The President dismissed the Minister of Information when he ordered the investigation of an armed robbery against a private television station conducted by an ally of the President. The country’s journalists were then warned by the president that freedom of the press had limits. Magufuli urged the new minister to turn to media that are considered to stir up concern and threaten to destabilize the country. Several people, including students, were indicted for insulting the president on social media. The sentence can be up to three years in prison or a high fine.

In April, more than 9,000 public employees who had their CVs rejected as forgeries were dismissed following a nationwide review of academic grades.

In May, the president dismissed the government’s mining minister after it was discovered that foreign mining companies, without the authorities’ control, managed to evade tax by writing down the value of their exports. According to an investigation, the mining industry’s cheating had cost the state the equivalent of more than SEK 700 billion since 1998. In July, Parliament voted for new laws that would give the state better control over the mining industry.

Parliamentarian Halima Mdee of the opposition party Chadema was arrested in July accused of insulting President Magufuli. It happened after the president called on the authorities to intervene in what he called thoughtless statements by opposition leaders.

In September, Tundu Lissu suffered an attack outside his home in the capital, Dodoma, where he was shot and nursed in a hospital in critical condition but survived.

In September, the authorities closed for the second time the regime-critical newspaper MwanaHalisi with allegations of incitement to violence following critical material about President Magufuli. The ban was valid for two years. Another newspaper, Mawio, had also been banned for two years following allegations against former presidents of corruption. In September, the weekly newspaper Raia Mwema, who criticized Magufuli, was banned.

During the year, a lawsuit was launched against the owners of a website where readers can publish information about suspected corruption. They were charged with failing to disclose the identity of users who published what the authorities considered to be false information.

Six men were sentenced in September to 20 years in prison each for kidnapping a 12-year-old boy who was an albino and chopping off his hand to sell it as a magic power source.

The government’s Minister of Health declared during the year the fight against homosexuals. This led to a group of women and men being arrested in Zanzibar after a seminar on HIV and AIDS. In Dar es-Salaam, the chief of police called on residents to report links to homosexuality, and in the capital, several men were arrested accused of homosexual activities. Several AIDS clinics in the country have been closed. The government also threatened to revoke permits for aid organizations that support gay rights and expel their staff. Tanzania has a ban on sexual relations between men (not women), who can be punished with up to life imprisonment.

An environmental battle was fought during the year around the extensive Selous Game Reserve in southern Tanzania. Oil companies, mining and poaching of elephants threatened the World Heritage-listed reserve. The World Nature Fund demanded that the government stop its plans for mining uranium and gold in Selous and increase its efforts against poaching.