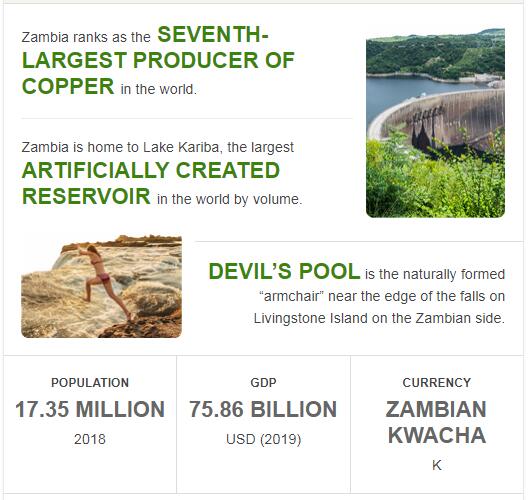 Zambia. According to Countryaah.com, President Edgar Lungu brought in the hard gloves against those who refused to acknowledge his election victory in August 2016. In April, the second of the elections, Hakainde Hichilema, was charged with treason. According to the authorities, Hichilema’s vehicle column had blocked the way for the presidential shortcut on the way to a traditional ceremony in the western part of the country where both politicians were going. In doing so, the opposition leader would have put Lungu in danger. After four months in custody, Hichilema was released on the day the trial should have begun. Hichilema has the support of large sections of Zambia’s population and received almost 48% of the votes according to the official result which he himself refused to admit. See ABBREVIATIONFINDER for frequently used acronyms and abbreviations related to as well as country profile of Zambia.

In June, Parliament’s President shut down 48 members of the United National Development Party (UPND), led by Hichilema. The reason for the 30-day suspension without pay was because the parliamentarians boycotted President Lungu’s speech to parliament in March. Politicians were asked to leave their seats in the National Assembly if they did not recognize Lungu as the legally elected president. In August, another opposition politician, Savior Chishimba, was arrested after publicly criticizing Lungu. Chishimba was charged with defamation by the police and allowed to be detained for a week before he was released without prosecution.

In early July, President Lungu introduced a state of emergency following a number of fires that were suspected of being created. Among other things, the largest market in the capital Lusaka and several public buildings had been burned. In addition, power lines had been cut with power outages in some mining areas as a result. The state of emergency allowed the police the right to ban public meetings, shut down roads and impose curfews. The police’s increased opportunities to keep people arrested for longer than usual were criticized by the opposition. According to UPND Vice President Geoffrey Mwamba, the state of emergency was a way to silence critical voices against the president and “kill democracy” in the country. The state of emergency was extended by Parliament by three months in July and was lifted in mid-October.

In September, the budget for 2018 was presented by Finance Minister Felix Mutati. Outside the parliament building, hundreds of protesters gathered who accused the government of corruption. Several of the protesters were arrested and taken away by the police.

Obtained independence from the United Kingdom in 1964, Zambia (formerly Northern Rhodesia), together with Tanzania, was for at least a decade the most advanced country on the so-called ‘front line’, i.e. on the border between the independent states of Sub-Saharan Africa and countries that were still under colonial rule or were ruled by racist regimes, such as Southern Rhodesia and South Africa. Even after the independence of the Portuguese colonies, Zambia was always involved in the struggle against apartheid regimes, so much so that the headquarters of the South African African National Congress (ANC) party was located in the Zambian capital of Lusaka. Many Southern African National Liberation Movements, from the Swapo(South West Africa People’s Organization), Z apu (Zimbabwe African People’s Union) and Zanu (Zimbabwe’s African National Union), found political and logistical support in Zambia. As in Tanzania, also in Zambia the first president of independence, Kenneth Kaunda, developed a nationalist version of socialist thinking, known as ‘Zambian humanism’. This allowed the country to maintain a prominent position in the ‘Non-Aligned Movement’ (of which Kaunda was secretary from 1970 to 1973), while maintaining a certain distance from the communist regimes, unlike what happened in the neighboring states of second decolonization, very much more ideologically aligned with international socialism (in the Chinese or Russian version).

The end of the Cold War reduced the strategic importance of Zambia, which today is an authoritative member of the Sadc (the Development Community of Southern African States), led from 2007 to 2008 by Levy Mwanawasa, the country’s third president. Relations with neighboring states and with South Africa are good despite Zambia complaining of the excessive economic and commercial power of the regional power.

At the international level, Zambia maintains good relations both with international donors and with emerging powers. The question of China ‘s penetration into Zambia has also become a source of lively debate in the country’s internal politics. Although Beijing invests around 1.2 billion a year, creating induced activities and local employment, there have been several episodes of revolt against the working conditions imposed by Chinese companies.

In 1991, after almost twenty years of a one-party regime of the United National Independence Party (Unip), President Kaunda called the first democratic elections, won by the opposition party Movement for Multiparty Democracy (Mmd), with Frederick Chiluba as the new leader. of state. Kenneth Kaunda was the second African president to leave power after establishing multi-partyism and being defeated in the elections, thus favoring the democratic process.

However, Chiluba’s two presidential mandates disappointed expectations of reforms and a more determined fight against corruption. The opposition managed to prevent Chiluba from modifying the Constitution to run for the third term, but this did not lead to the defeat of the MMD: in 2001 his candidate Levy Mwanawasa won the elections again. During the presidency of Mwanawasa there was a visible commitment to reduce corruption, culminating in the trial initiated against Chiluba himself. In 2008, however, Mwanawasa’s death reduced the momentum of these reforms, and Chiluba’s acquittal followed.