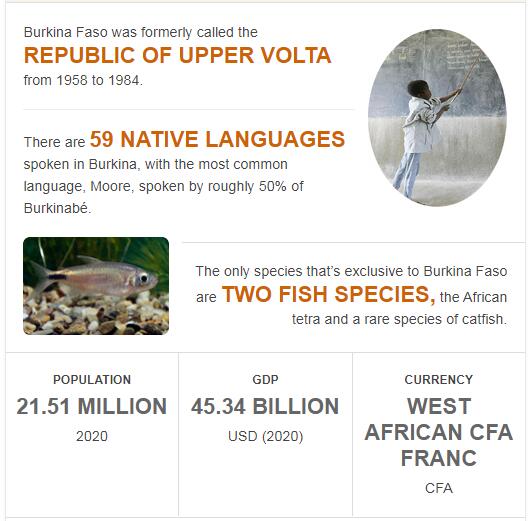 Burkina Faso. Following an attack in Mali in January, five countries – in addition to Burkina Faso and Mali also Chad, Niger and Mauritania – agreed to establish a joint force aimed at fighting militant Islamist groups. According to Countryaah.com, the force is planned to consist of 10,000 police and soldiers and is to have its headquarters in Mali. In June, the plans were cleared by the UN Security Council, which then adopted a resolution on the issue. However, the direct UN mandate advocated by France did not go away. The argument for this was that the force is only intended to operate in the territories of the five participating countries. The strength will be partly financed by the EU, which has promised to contribute EUR 50 million. See ABBREVIATIONFINDER for frequently used acronyms and abbreviations related to as well as country profile of Burkina Faso.

Despite the joint efforts, in August a terrorist attack was carried out against a Turkish restaurant in the capital Ouagadougou, in which 19 people were killed and twenty were injured. The attack was carried out by two men who were eventually shot to death by security forces. According to Burkinian sources, the two terrorists are likely to have come from Mali and have probably been linked to one of the Islamist groups that are close to al-Qaeda. As in several neighboring countries, Burkina Faso’s northern parts are plagued by militant organizations that attack both the military and civilian targets such as schools. One of the most active groups calls themselves Ansaroul Islam. Its leaders condemned the September attack in Ouagadougou in August and criticized the fact that several prominent Muslims were killed.

In November, during French President Emmanuel Macron’s visit, violent protests erupted at the University of Ouagadougou and a French military vehicle suffered a grenade attack. During his stay in the country, Macron promised to lift the secret stamp on French documents relating to former Burmese President Thomas Sankara. Sankara was murdered in 1987.

At the turn of the century the political life of the BF continued to be dominated by B. Compaoré, who came to power in 1987 with the coup that had deposed and killed Th. Sankara, a young leader who gained international attention for his original initiatives.. Elected president of the Republic in 1991 and confirmed in 1998, Compaoré had built an ‘authoritarian democracy’ in which the apparent respect for forms corresponded to an almost total control of power by the president and his party (Congrès pour la Démocratie et le Progrès, CDP) and the substantial impossibility for the opposition movements, which grew in a very fragmented way during the 1990s, to find adequate spaces for expression and institutional representation. The lack of a real democratic dialectic then favored the spread of corruption in all sectors of the public apparatus, as reported by a United Nations document, the Human Development Report 2004, which also denounced the increasingly frequent violations of rights. humans.

Towards the end of the nineties, political and social tensions worsened, also due to the persistence of a difficult economic situation. When in December 1998 he was killed in an ambush N. Zongo, very well-known journalist and highly critical of the regime (he was the founder and editor of the weekly L’indépendant, a leading political media BF), the country it was traversed by a series of student and union demonstrations and protests, which became increasingly violent after the report of an independent commission of inquiry, which hypothesized the involvement in the assassination of a group of presidential guards. The government reacted with some signs of openness, proclaiming 2000as a year of national reconciliation and establishing a ‘national day of forgiveness’: a substantially propaganda operation, which was not matched by a relaxation of the repression, nor the real healing of the institutional wound opened by the 1987 coup. In fact, despite the approval in 2000 of an electoral reform which provided for the election with the proportional system of 90 deputies on regional lists and 21 on national lists, and which above all, meeting the demands of the opposition, reduced the presidential mandate from 7 to 5 years and made it renewable only twice, a real process of democratization had not yet started.

The regularity of the elections, which had taken place with the new system in May 2002 and in which the CDP obtained 57 seats out of 111, was harshly contested by the opposition, while the government gave a particular interpretation to the constitutional amendment concerning the duration of the presidential mandate., considering it not applicable to the November 2005 elections but only to the subsequent ones, and thus allowing a new candidacy of Campaoré. The government’s announcement in October 2003 that it had foiled a coup attempt seemed to many to be yet another attempt to justify repressive policies. In November 2005 Compaoré was re-elected with 80% of votes.

Meanwhile, the country’s economic situation remained critical, despite the debt reductions still granted in July 2000 by the World Bank and the International Monetary Fund as part of the so-called HIPC (Heavily Indebted Poor Countries) initiative. In 2004 the 45% of the population lived below the poverty line, while the lack of diversification of productive activities and the strong dependence on the export of cotton contributed to making the economic situation precarious. Despite these difficulties, the Burkinabè society continued to demonstrate great vitality, and the country’s capital to maintain that role of crossroads of cultures (African and international) that it had assumed in the Eighties with the Sankara presidency.