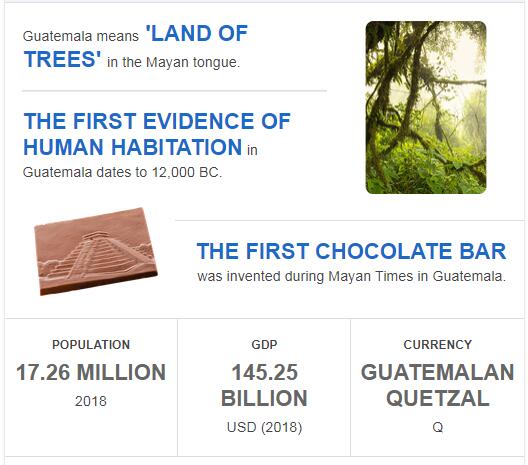 Guatemala. According to Countryaah.com, the situation became increasingly critical for President Jimmy Morales during the year. In August, Prosecutor General Thelma Aldana and the head of the UN-supported Special Commission Against Impunity (CICIG), Iván Velásquez, presented a report on illegal election campaign funding. The report pointed out President Morales, who, as party secretary, responsible for his party’s failure to disclose the origins of $ 600,000 to the 2015 election campaign for his party FCN-Nación (Aldana and Velásquez), who made themselves known for his uncompromising struggle against the corruption in the country, at the same time made it clear that they would take steps to deprive Morales of his immunity and bring him to trial. Morales caused great outrage by only two days later declaring Velásquez persona non grata and ordering him to leave the country. Both domestic grassroots movements and international players, such as the UN and the EU, objected to Morale’s decision, and it was also repealed by the Guatemalan Constitutional Court as a violation of the Constitution. Morales was also involved in a corruption charge against his son and brother, who were brought to justice on August 30. See ABBREVIATIONFINDER for frequently used acronyms and abbreviations related to as well as country profile of Guatemala.

Morales and Guatemala’s reputation was not significantly improved by the events in the following months. First, it was revealed that Morales illegally received unreported payments from the military, and in October, Congress voted no to deprive him of his immunity and voted simultaneously to prevent party secretaries from being held accountable for any illegal election funding. Media noted that several of the congressmen who supported the proposals themselves were suspected of financial irregularities. Not unexpectedly, in October, the international credit rating agency Standard & Poor’s announced that, due to, among other things, persistent political instability, Guatemala had been downgraded to BB- on its index scale. Equally gloomy was the UN report on the standard of living in the country that came at the beginning of the year.

However, prosecutors Aldana and Velásquez continued their investigations on corruption in the country’s other parties tirelessly. Álvaro Arzú, former president (1996-2000) and current mayor of Guatemala City, was also charged with corruption and conspiracy with organized crime.

History. – Under the presidency of Juan José Arévalo (1945-50), characterized by an exasperated Peronist-inspired nationalism and a strong sympathy for the Communists, the country had a shift to the left that was to be accentuated in the following government. The elections of November 12, 1950 brought to power Colonel Jacobo Arbenz Guzmán (former member of the junta that had deposed General Ubico in 1944), a fiery nationalist who did not take long to openly siding with the Communists who controlled the General Confederation of Labor; this imposed advanced social reforms, welcomed with enthusiasm by the dispossessed popular masses made up mostly of peasants and Amerindians. This led to the agrarian reform (June 17, 1952), which provided for the expropriation and redistribution of uncultivated lands to the peasants. Among these, many belonged to the United Fruit Company, a powerful US company that with its banana plantations, railways, port facilities, etc. it controlled a large part of the country’s economy. In 1953 the company saw more than half of its properties expropriated and appealed to the State Department which, having rejected the proposal to submit the matter to the Hague Court, asked for compensation of 15 million dollars. The rejection of the request and the accusations of interference in internal affairs and economic imperialism addressed by Guatemala to the United States only aggravated relations between the two countries, especially since Washington appeared alarmed by the possibility of a communist bridgehead between Texas and Panama Canal. Other Central American states also proved concerned by the attractive of Guatemala, which repeatedly resorted to the OAS accusing the Dominican Republic, El Salvador, Nicaragua and Venezuela of organizing (with the support of the USA) invasions against its territory. At the X Inter-American Conference (Caracas, 1-28 March 1954) Guatemala, Argentina and Mexico were the only participants who did not sign the anti-communist motion. In May of the same year, Polish weapons were landed in Guatemala: the White House then openly sided against the government of Arbenz Guzmán, accusing it of threatening peace on the continent. On 18 June a “liberation army” commanded by Colonel Carlos Castillo Armas, coming from Honduras, entered the Guatemala and quickly defeated the troops who remained loyal to Arbenz Guzmán. Guatemala appealed to the UN, which referred the matter to the OAS (despite the Soviet veto), but when the mission charged with realizing the situation reached Guatemalan territory, it was faced with a fait accompli. Castillo Armas, at the head of a military junta, took over the leadership of the country, brought it back into the orbit of the United States and canceled almost all the social and economic measures adopted by its predecessors, causing resentment and giving the opposition reasons for agitation and demands. On 10 October the Constituent Assembly appointed Castillo Armas as president. Its despotic tendencies and the country’s precarious economic conditions often disturbed the tranquility of the nation by forcing the government to resort to acts of force to quell attempts at insurrection. This dissatisfaction resulted in the assassination of Castillo Armas (July 26, 1957), following which there was a series of provisional presidents, councils, resignations and canceled elections in Guatemala until, on January 19, 1958, the conservative Miguel Ydígora Fuentes was elected president who, not having obtained the required majority, had to be confirmed by Congress (February 12). The legislative elections of December 6, 1959 resulted in a landslide victory for the right, while the Communists, outlawed, were represented by the Revolutionary Party. On February 6, 1960, Guatemala signed an economic association treaty with El Salvador and Honduras. In the meantime, relations with Cuba worsened and on April 26, diplomatic relations between the two nations were broken. Following riots and attacks, attributed to supporters of “Castroism”.