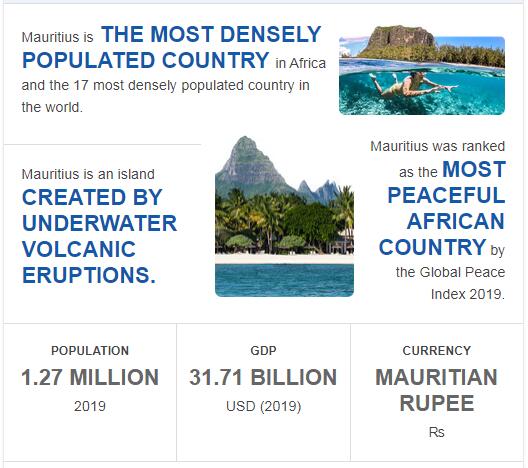 Mauritius. In January, the Prime Minister since 2014, Anerood Jugnauth, announced his departure. He was succeeded as head of government by his son Pravind Jugnauth, who also took over as interior minister and also remained as finance minister. According to Countryaah.com, Anerood Jugnauth, who was President 2003-12 and has been Prime Minister several times, retained the post of Minister of Defense. The year was then marked by a series of political scandals and a number of shifts in the ministerial posts, which also caused party members to question the leadership of the new prime minister. See ABBREVIATIONFINDER for frequently used acronyms and abbreviations related to as well as country profile of Mauritius.

In February, local elections were held on the island of Rodrigues. The election attracted 80% of the electorate and ended with a clear victory for the Rodrigue People’s Organization (OPR), which received 60% of the vote and 10 out of 17 seats in the local parliament. The remaining seven seats went to the Rodrigues Movement Party.

In February 2004, UNESCO Secretary General Koïchiro Matsuura conducted an official three-day visit where he met with delegates from the African Parliamentary Education Forum in Africa.

In late February, workers demonstrated against the impending visit by WTO Secretary-General, Supachai Paritchpakdi. They accused the organization of being a threat to people’s social rights.

At a Mauritius meeting in October, Francophone Africa Justice Ministers pledged to introduce common instruments in the fight against terrorism and the UN Conventions on Organized Crime and Corruption. The meeting was organized by the Government, the United Nations Office on Drugs and Crime (UNODC) and the Francophone Countries Cooperation Unit. The meeting adopted according to. Furthermore, the UN has legal guidelines for the introduction of common instruments against terrorism, within the framework of the UNODC.

In January 2005, an international conference was held in Mauritius for small island-based developing countries. The main purpose of the conference was to discuss the use of renewable energy sources and the use of cleaner technologies. The conference also decided that: “Climate change and rising sea levels in the world seas are some of the most worrying developments for the small island states” and at the same time recognized the need to “step up efforts to influence the WTO decision-making processes “. As the island states are small, they have clear disadvantages and structural difficulties in being integrated into the world economy and therefore require better access for their agricultural products to the international markets.

In April 2006, a group of 102 Chagos residents living in Mauritius were finally allowed to visit their land in the Indian Ocean – Diego Garcia – from which they were displaced in 1960, when the United States was to use the island as a military base. They were given a 3 day visa to visit their abandoned villages and cemeteries.

An outbreak in May 2006 of the chikungunya virus cost the country dearly economically, as the flow of tourists, among others. took off drastically.

The state budget for 2007-08 finally took steps to reduce the gender inequality in the country and “settle the gender stereotypes”. Women’s groups congratulated the government and declared that the move provided a better platform for those groups working hard to raise awareness about gender inequality.

In September 2008, Jugnauth was unanimously re-elected President of the National Assembly.